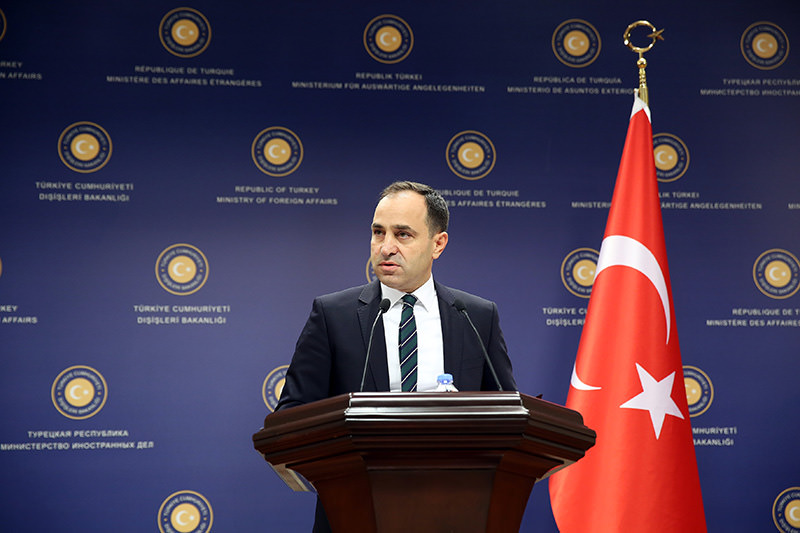 by Merve Aydoğan
Nov 05, 2015 12:00 am
The Foreign Ministry said on Thursday that it welcomes the recent remarks from Pentagon spokesman Colonel Steve Warren regarding the U.S. "as for now" not providing weapons or ammunition to the YPG, the military wing of the PKK-affiliated Democratic Union Party (PYD). Speaking on Thursday at a press briefing, Foreign Ministry spokesman Tanju Bilgiç said: "Although we welcome the U.S.'s statements, Turkey has often expressed its concerns to the U.S. before regarding this. It is a satisfactory development." Providing details of Foreign Minister Feridun Sinirlioğlu's trip to Irbil, the capital of the Kurdistan Regional Government (KRG), Bilgiç clarified media reports on Sinirlioğlu's statements made at a conference on the future of the Middle East and denied reports of Turkey planning to conduct a ground operation against the Islamic State of Iraq and al-Sham (ISIS).

As many government officials have underlined that Ankara considers the PYD a terrorist organization, no different to the PKK, President Recep Tayyip Erdoğan and Prime Minister Ahmet Davutoğlu have stressed many times that the government is deeply concerned about the U.S. providing ammunition to the YPG and that Turkey will treat same the PYD as the internationally recognized PKK terrorist organization if it transfers weapons to the PKK and poses a threat to Turkey. In this regard, Warren said: "As of now, we are not providing weapons or ammunition to the YPG. The weapons that we have provided thus far, with the ammunition that we have provided in our one airdrop that was executed, was for the Syrian-Arab coalition. As of now, future resupplies will also go to Arab-Syrian opposition members." Warren further commented on Ankara's concerns and said the U.S. will address the concerns.

Bilgiç denied claims of establishing a military communication channel between Turkey and Russia following Russian violations of Turkish airspace, but said channels are open for information exchange. With Turkey holding the G20 presidency and the annual summit in Antalya on Nov 15-16, the issue of terror and the rising refugee crisis will top the agenda of the leaders.
Last Update: Nov 06, 2015 8:08 pm