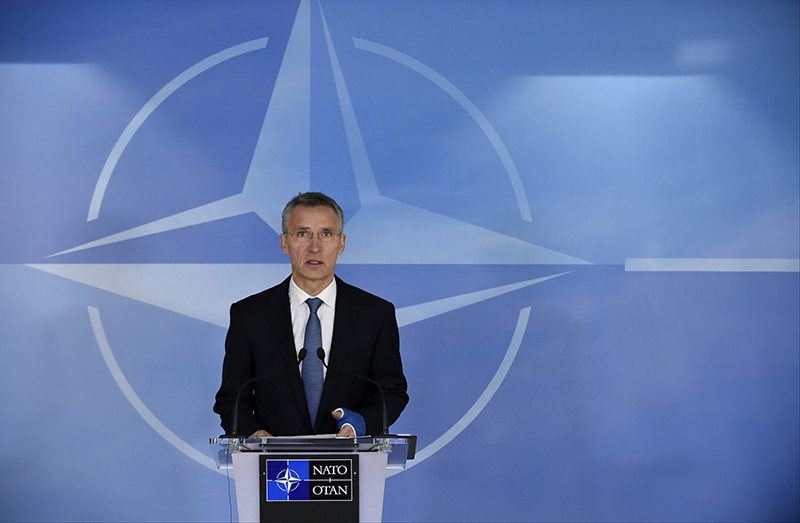 NATO Secretary General Jens Stoltenberg gestures as he speaks during a press conference before a Foreign Affairs meeting at the NATO headquarters in Brussels (AFP Photo)
by Merve Aydoğan Dec 01, 2015 12:00 am
The NATO Foreign Ministers' meeting concluded in Brussels on Wednesday and agreements were made to provide both political and military support to Turkey. NATO stated that Turkey is on the front lines of regional instability to the south and, therefore, will rebuff the country's maritime and missile defenses as well as send more surveillance drones to the Syria-Turkey border.

Since Russia has deployed a S-400 missile defense systems near its base in Latakia after the downing of its jet, Italy has indicated that it will deploy Patriot air and missile defense units to Turkey. Additionally, the mission for the Patriot air defense missile systems, which were provided by Spain as part of its NATO obligations has been extended beyond its previous end date of January 2016. Speaking during a press conference on Tuesday, NATO's Secretary General Jens Stoltenberg stated that "We [NATO] have approved a new strategy on hybrid warfare. We are also improving our intelligence and early warning mechanisms to help us better understand the region and increase our situational awareness."

Underlining that NATO has backed Turkey's air defense for several years and will continue to do so, Stoltenberg also said that NATO is seeking to further assist Turkey. To this end, shortly after the general elections on Dec. 20 in Spain, its parliament will agree to extend the mission period of the Patriots in Turkey. As both the U.S. and Germany have withdrawn their Patriot missiles from Turkey, the new missiles will be provided by Italy. Additionally, it has been stated that the U.K. will send eight warplanes to support Turkey. The British warplanes have conducted operations jointly with the U.S.-led coalition from Turkey's İncirlik Air Base.

Denmark is said to be sending frigates to protect Turkey from Russian S-400 missiles and to provide electronic intelligence through the jammers it will install. In light of these recent developments, the decision was made that Germany will deploy Tornado jets to Turkey's İncirlik base for the purpose of conducting exploratory flights in the region. The U.S. has agreed to continue keeping its naval ship, USS Donald Cook, in the region. The ship is equipped with Aegis missile defense systems and Tomahawk missiles. The USS Donald Cook has been known as an important naval ship and aims to protect Turkey in the case of any ballistic missile attack.

During its recent meeting, NATO stated that the information Turkey has provided on the downed Russian jet is accurate. Furthermore, NATO officials ended the meeting by confirming their continued political and practical support for Ukraine. Stoltenberg stressed that NATO is committed to supporting a peaceful, diplomatic end to the conflict in eastern Ukraine. In addition, while the NATO Foreign Ministers invited Montenegro to become the 29th member, the decision was also made to sustain the presence of the Resolute Support mission to train, advise and assist the Afghan forces with around 12,000 troops during 2016.

NATO deployed its Patriot missiles along the border in January 2013 to shoot down any missiles fired into Turkish territory from Syria's conflict zone. Ankara had appealed to the alliance to maintain its defensive even before the flare-up of tensions with Russia regarding airspace violations. "We need to support Turkey," Canada's Foreign Minister Stephane Dion said upon his arrival in Brussels for meetings with his NATO peers on Tuesday. A senior U.S. State Department official said: "We have a number of allies who are considering increasing their effort to support Turkish sovereignty and security, but also looking at operations in Syria, adding to what the French have been doing in recent weeks. The secretary will make the case that we need even more."

Looking to engage with Russia to defeat DAESH, NATO's Jens Stoltenberg said strengthening Turkish air defense was not a knee-jerk reaction to the Nov. 24 downed jet incident. "We decided to address the need to support Turkey before the incident last week," he said. "The focus now should be on how we can de-escalate and calm tensions." While the Turkish air force has shown that it is capable of intercepting Russian jets on bombing raids in Syria, diplomats say sending military support to Turkey is also designed to reassure Ankara and calm tensions.