Putin must uderstand there is no military solution in Syria, Obama says 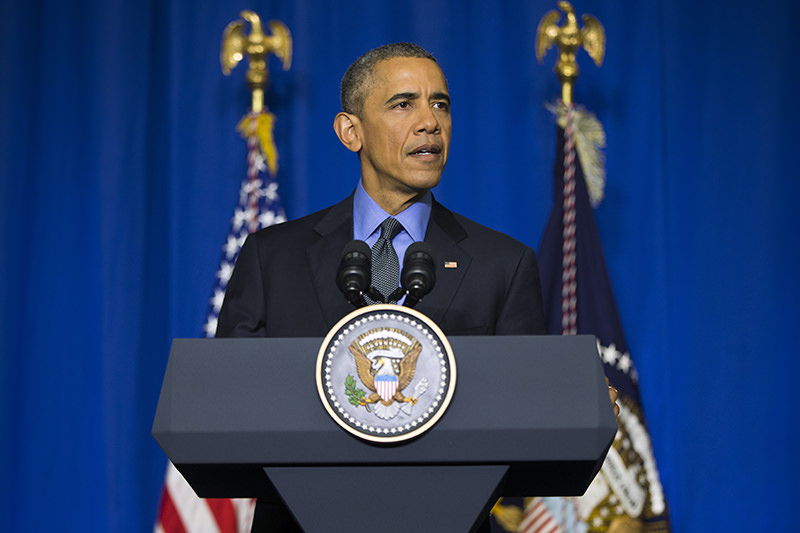 U.S. President Barack Obama speaks during a news conference at the Organization for Economic Cooperation and Development Centre, in Paris (AP Photo)
by Daily Sabah with Agencies Dec 01, 2015 12:00 am
Aiming to head off a rift between major players in the Middle East, U.S. President Barack Obama urged Turkey and Russia on Tuesday to set aside tensions over the downing of a Russian warplane and focus on the shared priority to defeat DAESH.

"Putin must now understand that there will be no military solution in Syrian civil war," Obama said.

In a meeting with Turkish President Recep Tayyip Erdoğan on the sidelines of global climate talks in Paris, Obama defended the NATO ally's right to defend its borders, pledging a solid U.S. commitment "to Turkey's security and its sovereignty." Yet, he emphasized the need for Turkey and Russia to "de-escalate" their conflict and not get distracted from the campaign against DAESH and efforts to resolve Syria's long-running civil war.

"We all have a common enemy. That is ISIL [DAESH]," Obama said, using one of several acronyms for the extremist group DAESH. "I want to make sure that we focus on that threat."

Obama said it was possible over the coming months that Russia could undergo a "shift in calculations" and back away from its support for Syrian President Bashar Assad. "I don't expect that you're going to see a 180-degree turn on their strategy over the next several weeks," Obama said. "They have invested for years now in keeping Assad in power. Their presence there is predicated on propping him up. That's going to take some time for them to change how they think about the issue."

Tensions between Turkey and Russia have erupted into a diplomatic crisis since Turkey shot down a Russian military jet, which is accused of violating Turkish airspace, less than two weeks ago. Russian President Vladimir Putin claimed Turkey shot the plane down to protect oil he says was being illegally imported from DAESH – a charge Turkish officials vehemently deny. Turkey has insisted it will not apologize for the downing, which also led Russia to impose a package of new sanctions onto Turkish products.

The spat between the two countries, both of which the U.S. sees as critical to resolving the Syria crisis, threatens to undermine Obama's efforts to expand the U.S.-led coalition. After DAESH claimed responsibility for the Paris attacks and the downing of a Russian passenger jet in Egypt, Obama had sought to turn the outrage across Europe into newfound resolve for stepping up the fight against the terrorist organization.

Russian-Turkish relations have complicated U.S. efforts to prod Moscow into steering its military might towards DAESH rather than the moderate Syrian opposition. Putin supports Assad, while Obama and Erdoğan want him to go.