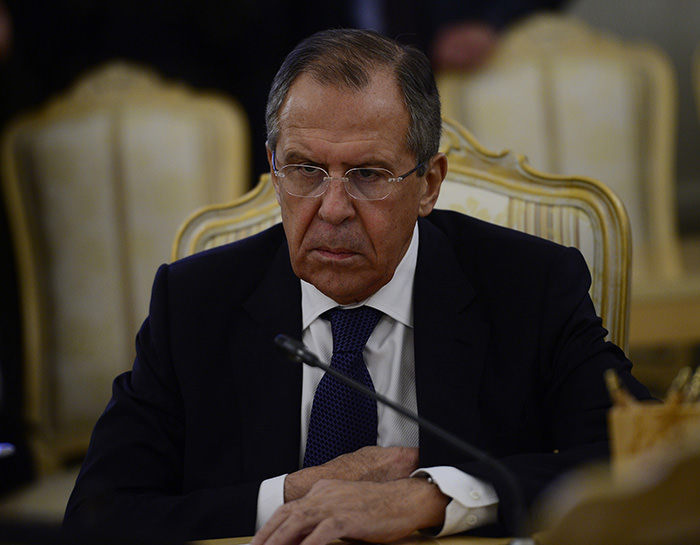 |AA Photo
by Daily Sabah Dec 02, 2015 12:00 am
Russian Foreign Minister Sergei Lavrov said Wednesday that he will not refuse to meet his Turkish counterpart Mevlüt Çavuşoğlu in Belgrade following the rift between Russia and Turkey over the downing of a Russian military jet on Nov. 24. Later on in the same day, he confirmed that he will meet with Çavuşoğlu in a statement he made during a visit to the Greek Cypriot Administration of Southern Cyprus.

The two ministers will hold talks during the ministerial council meeting of the Organization for Security and Co-operation in Europe (OSCE) on Dec. 3-4 in the Serbian capital. The meeting is expected to start at 02:30 p.m. GMT on Thursday.

The meeting was earlier proposed by Turkish authorities to keep the dialogue open between the two countries following the crisis in relations after the downing of a Russian fighter jet that breached Turkish airspace on Nov. 24.

Lavrov's comments came after meeting with Greek Cypriot Foreign Minister Ioannis Kasoulides in Nicosia. He added that Russia's expectation is that the Turkish side closes its borders to terrorists.

Ankara has repeatedly called on the Kremlin to de-escalate the tensions and requested bilateral meetings. President Recep Tayyip Erdoğan expressed his dissatisfaction with Russian President Vladimir Putin refusing to answer his phone call and meet in Paris at the climate summit.

Russia further escalated tensions by imposing sanctions on Turkey. Such moves by the Kremlin are interpreted as a heavy blow not only to Ankara but also to itself.

Commenting on Russia's decision to impose sanctions on Turkey, Prime Minister Ahmet Davutoğlu stressed that economic sanctions are "a weapon that backfires." He added that the Kremlin's approach turns into a "lose-lose" situation.
Last Update: Dec 03, 2015 10:52 am
RELATED TOPICS