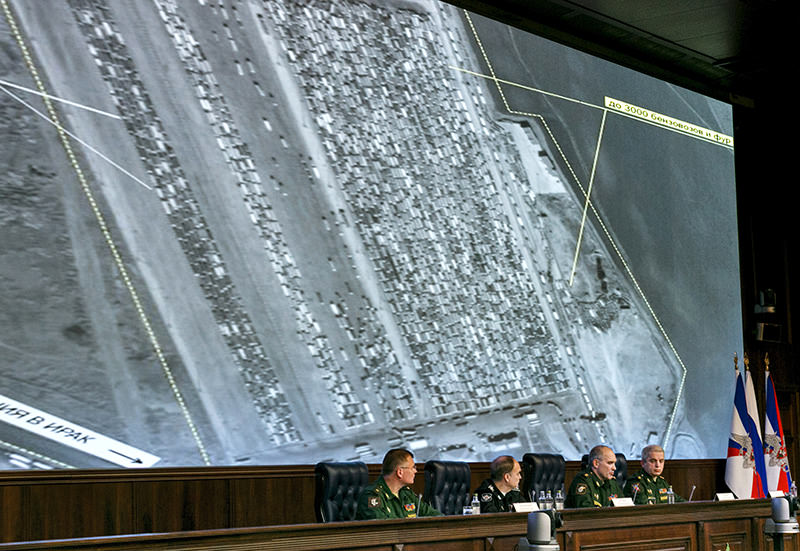 by Daily Sabah with AA Dec 03, 2015 12:00 am
The recent allegations put forth by Russia on Turkey – Daesh oil trade, which also involved Syrian and Iraqi Kurds, were denied by Iraq's Kurdistan Regional Government (KRG) officials.

Sherko Jawdat, the chairman of the KRG Parliament's Energy Committee, said on Thursday that the oil tankers shown in the aerial photos and footage presented by Russia as evidence of the alleged trade are in fact carrying oil from the KRG to Ceyhan terminal in southern Turkey.

Russia's Defense Ministry earlier alleged that oil tankers loaded in Daesh-held territories are passing from territories controlled by the KRG and PYD to reach Turkey. As the arch-enemies of Daesh terror organization who suffered the most casualties in battles, both the KRG and PYD are receiving military training, ammunition and arms from both the U.S. led coalition and Russia. The claims came right after a Russian SU-24 bomber breaching Turkey's airspace was shot down by Turkish jets on November 24.

Speaking to Turkey's state-run Anadolu Agency, Jawdat said the tankers belong to the KRG and Russia's claims are far from being true.
"Our Natural Resources Ministry has earlier announced that hundreds of tankers are carrying oil from KRG to Turkey. Oil is being shipped to Turkey with tankers and it is not a secret" Jawdat said.

Furthermore, the KRG spokesman Safin Dzayi said his government is saddened by the Russian accusations, and added that the oil flowing from the KRG to Turkey does not belong to Daesh, who the Iraqi Kurds are actively fighting. "Russia's explanations are based on wrong sources. We strongly reject Russian accusations," he said.

Dzayi explained that the oil extracted from the Duhok and Badinan regions is largely shipped to Turkey through pipelines, and the remaining amount is being shipped with tankers.

The KRG spokesman emphasized the role of Peshmerga fighters in the fight against Daesh. "Peshmerga is the leading force fighting against Daesh. Is it possible for the KRG to directly or indirectly sell the oil benefiting Daesh? Can the KRG mediate Daesh's trade? Such an allegation cannot be explained with reason or logic," Dzayi said.

Dzayi added that the KRG and Russia have good and friendly relations and Russian oil companies operate in the region. "We hope that Russia will revise its information over the matter," he said.

In a conference held in London on Wednesday, the KRG's Natural Resources Minister Ashti Hawrami said that Daesh is an important obstacle against KRG's oil exports, which would have reached about one billion barrels per day in the absence of the terrorist organization in the region.
Last Update: Dec 03, 2015 6:15 pm
RELATED TOPICS