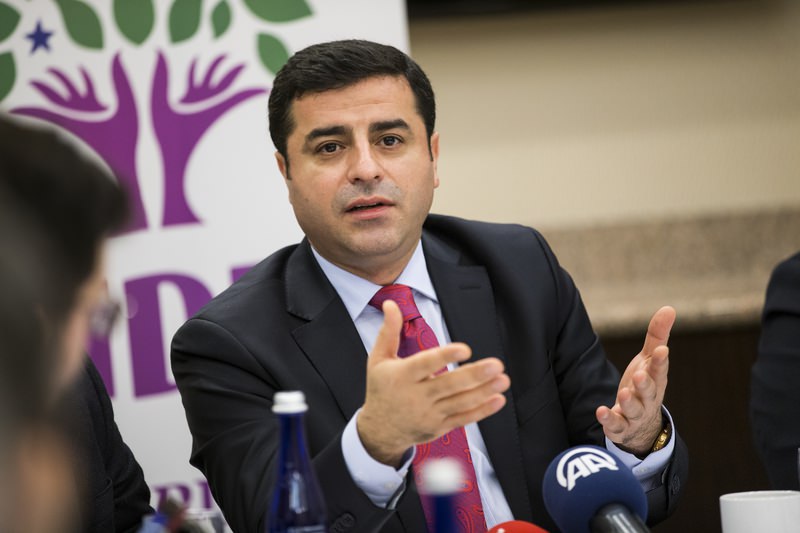 by Ragıp Soylu Dec 04, 2015 12:00 am
The pro-Kurdish People's Democratic Party (HDP) Co-Chairman Selahattin Demirtaş slammed U.S. policies in the Middle East as he branded them "imperialist" and accused the Obama administration of accidentally sending weapons and aid to the extremist groups Al Nusra and Ahrar Al Sham.

Speaking to Turkish press on Friday in Washington, D.C., Demirtaş said that the U.S. and Western countries have made mistakes in their operations on Syria in the past. He claimed that the weapons and aids addressed to the moderate Free Syrian Army have ended up with radical groups such as the Al-Qaeda linked Al Nusra and Ahrar Al-Sham. "The United States and Europe have ignored our warnings in this respect. The U.S. has made these mistakes," he said.

Demirtaş told journalists that he met U.S. Deputy Secretary of State Tony Blinken and President Obama's special DAESH advisor Rob Malley yesterday and discussed the need for a more attentive American strategy in Turkey. He invited the Obama administration to do more to encourage the Turkish government and the terrorist group PKK to restart peace talks. "I told them that their Syrian strategy could not succeed while Turkey considers the Syrian Kurdish group PYD as a threat. First and foremost, we should solve this problem in Turkey," he said.

Demirtaş's HDP is closely tied with the PKK, which is the sister organization of PYD in Syria. The Obama administration considers PYD's armed wing YPG one of the most effective forces against DAESH in the country. Demirtaş said that his party has been working with American officials to receive a visiting visa for PYD leader Salih Müslim, who has filed many applications but has not acquired one. Many in Washington perceived the U.S. refusal as a concession to Turkey, which repeatedly underlined the PYD's organic connections with the U.S.-designated terrorist group PKK.
Asked about his previous comments to the German newspaper Die Zeit concerning the differences between the United States and Kurdish groups, Demirtaş said his opinions have not changed. "I don't think the U.S. is in the Middle East for humanitarian reasons. Both the U.S. and Russia are in the region because of their imperialistic policies. It is a region which has the utmost geo-strategical importance with links to energy lines."

Demirtaş also said that the U.S. and Syrian Kurds are in a tactical alliance in the country but there is no ideological resemblance. He previously told Die Zeit that Kurds are an anti-imperialist group and an ideological clash between the two sides is possible in the future. "I don't know when or how this clash would occur," he said.

The HDP leader responded the previous reports saying that he saluted the noble resistance of Hezbollah in an interview with Lebanese TV channel Al Manar back in June. He said that he didn't say anything specifically about the Iran-backed group, "I just saluted the people's resistance in general." Demirtaş thinks that Hezbollah is part of the Shiite resistance which includes Tehran, Baghdad and Damascus. "Hezbollah doesn't send aid to Assad. They are different names in the same resistance", he said.