It is Turkey who halted Turkish Stream pipeline project, not Russia, Erdoğan says 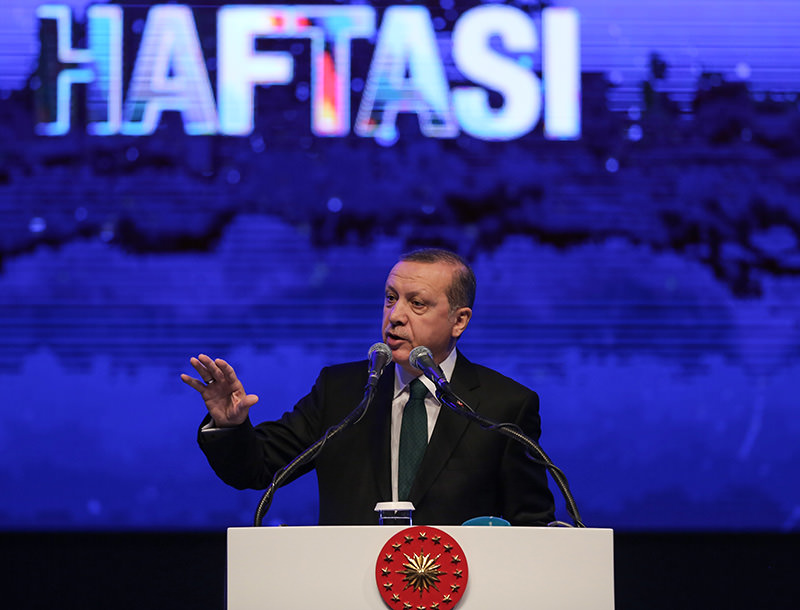 by Daily Sabah Dec 05, 2015 12:00 am
President Recep Tayyip Erdoğan said on Saturday that despite various media reports saying Russia has suspended preparatory work on the Turkish Stream pipeline project, it is in fact Turkey who suspended the project. He said, this project was laid aside a while ago since Russian side did not meet Turkey's demands. The president made the comments at a forum as part of the Turkey Innovation Week held in Istanbul Congress Center.

Erdoğan continued his speech by saying that while Russia was a major supplier of oil and gas to Turkey it was not the only one. "It is possible to find different suppliers," Erdoğan said, referring to Qatar and Azerbaijan.

Many media reports claimed that disagreements and political tensions between Turkey and Russia have left the Turkish Stream pipeline Project -- which was aiming to deliver Russian natural gas to Europe via the Turkish-Greek border -- hanging in limbo. "Currently, work on Turkish Stream has been halted," Russian Energy Minister Alexander Novak told reporters on Thursday, adding that despite this, talks regarding the building of a nuclear power plant in Turkey remain open.

But the pipeline project's suspension does not stem from the current political tensions between the two countries, but instead Russia's failure to fulfill Turkey's demands regarding the project, said Erdoğan.

Gazprom CEO Alexey Miller's previous assertions also confirms Erdoğan's statements, when he [Miller] told reporters on Thursday that the Turkish Stream project was halted because Turkey did not apply to Gazprom, bringing negotiations to a halt. Miller said that if Gazprom stops its gas flow to Turkey, its reputation in the country would be lost.

Erdoğan said Russia had made "no sign" that the crisis would affect their energy partnership, but he implied that Ankara was seeking new suppliers. He said, "We do not approve of Russia's attitude in escalating tensions [after downing of the jet]. Currently, we are not speaking of their language."

"We are speaking a diplomatic language. We are patient in this issue."

The president this week visited the Gulf country Qatar, where he agreed a deal for LNG purchases, while Prime Minister Ahmet Davutoğlu traveled to energy-rich Azerbaijan.

President Erdoğan also touched upon Russia's recent sanctions on food and textile goods, saying that Turkey is not a country to "fall to pieces" through such restrictions on its exports. He called onto Russia, saying: "So what if you don't buy? Other doors, other sources open. Even now they are opening."