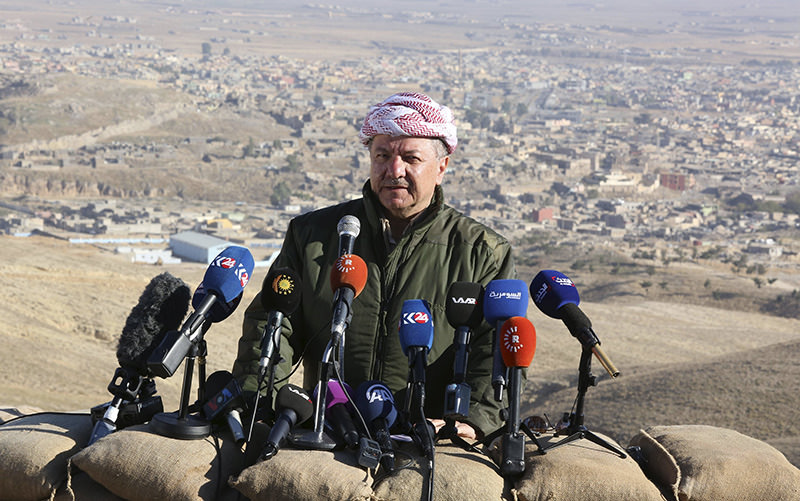 Iraqi Kurdish Regional President Massoud Barzani speaks during a news conference in the town of Sinjar, Iraq Nov 13, 2015 (Reuters photo)
by Daily Sabah Dec 08, 2015 12:00 am
Massoud Barzani, the head of the Kurdistan Regional Government (KRG) in northern Iraq, said on Tuesday that the presence of Turkish forces in Iraq was within the context of a pre-arranged deal between the two countries to train forces who will participate in the anti-Daesh Mosul operation.

On Friday, 150 Turkish soldiers equipped with heavy weapons arrived on the outskirts of the Daesh-held Mosul province in Northern Iraq, while Baghdad demanded the withdrawal of soldiers. Iraq on Sunday, gave Turkey a 48 hour ultimatum to withdraw the forces or face "all available options."

During a joint press conference with German Foreign Minister Frank-Walter Steinmeiera, Barzani said, "According to the information we received, Turkey and Iraq had previously agreed on the deployment of Turkish soldiers around Mosul. The two countries had formed such an alliance to train voluntary soldiers participating in a [future] Mosul operation [to free it from Daesh terrorists]."

"The deployment in question has been done in line with the agreement between the parties. In my opinion, this issue has been exaggerated."

Barzani also said the KRG is welcoming any attacks against Daesh, but Russian attacks are hurting the region by forcing it to close its airports, Kurdish media reported on Tuesday.

"This issue needs to be solved and we ask Russia to not make problems for the KRG's airline," Barzani announced.

Barzani is expected to visit Ankara on Wednesday. During his meeting with the Turkish officials, issues such as the fight against Daesh terrorists and training given by the Turkish military to peshmerga will be discussed.

During AK Party's parliamentary group meeting on Tuesday, the Prime Minister Ahmet Davutoğlu said that the Turkish troops were in Iraq to protect against a possible attack from Daesh and that those who interpreted their presence differently were involved in "deliberate provocation". He said more than 2,000 people had received training at the Bashiqa camp upon the request of Mosul governor.

According to the statement released by the Prime Ministry on Sunday, Davutoğlu informed Al-Abadi about the military training program currently in progress in Bashiqa, duties and activities of Turkish soldiers and current developments about the matter.
Last Update: Dec 08, 2015 5:59 pm
RELATED TOPICS