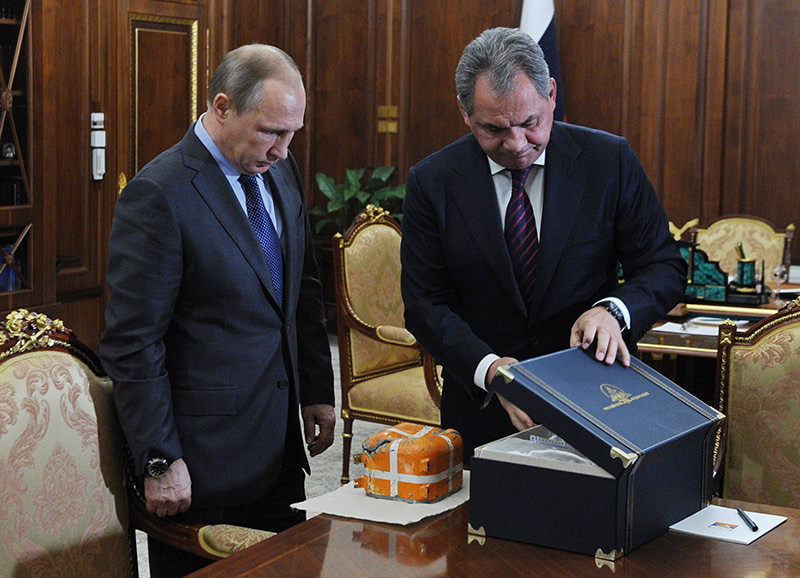 by Anadolu Agency Dec 09, 2015 12:00 am
Russian President Vladimir Putin has said he wants international experts to examine the black box of the Russian SU-24 jet downed for violating Turkish airspace on Nov. 24. However, he said: "Whatever we learn [from the black box] won't change our attitude [about] what the Turkish authorities did."

Putin made the remarks during his meeting with Defense Minister Sergei Shoigu late Tuesday, who presented the recovered flight recorder from the jet to the Russian president.

Following the incident, Moscow announced wide-ranging sanctions against Turkey, including the end of visa-free travel and a ban on Turkish food products. Russia also called on its nationals to boycott Turkey as a tourist destination.

Shoigu also said Russia had now increased the intensity of its airstrikes in Syria and conducted a massive air and missile attack using TU-22 strategic bombers from Russian territory.

"For the first time, we launched Kalibr cruise missiles from a Rostov-on-Don submarine based in the Mediterranean Sea," he added. Shoigu said both the air force and the submarine fleet were "successful" in hitting all of their targets. "We [tracked] both the launch of the missiles and their flight, as well as ensured that they hit the targets, which were two major terrorist facilities in Raqqa [Syria]," he said.