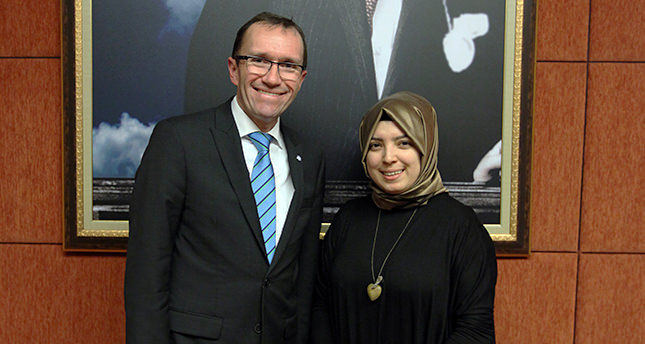 by Merve Aydoğan Dec 11, 2015 12:00 am
With the continuing negotiations between Turkish Cypriot President Mustafa Akıncı and Greek Cypriot President Nicos Anastasiades for a reunified Cyprus, the U.N. special adviser for Cyprus, Espen Barth Eide, speaking to Daily Sabah late Wednesday dismissed reports on the citizenship ratio that Greek Cypriot media outlets reported would be four Greek Cypriots for every Turkish Cypriot in a new unified Cypriot federation. Eide said: "As a special adviser, I am not confirming whether there is or isn't an agreement regarding the citizenship ratio, however the situation is about what you will do in the future with getting new people, not existing people, or babies to be born. You can't do much about the people currently living there or their private initiatives."

Eide also commented on his meeting with Prime Minister Ahmet Davutoğlu as well as Foreign Minister Mevlüt Çavuşoğlu and Foreign Ministry Undersecretary Feridun Sinirlioğlu. He said that the "meetings were very good and substantive with a good tone." Eide also said that during the meeting with Turkish officials he noticed that there is a genuine sense from the Turkish government and added that getting the problem off the table is good for Turkey's ambitions in the region and the world.

The issue of property, which is among the six main topics of the Cypriot negotiations, has been prioritized on the agenda of the two Cypriot leaders, according to Eide. Commenting on Anastasiades and Akıncı's current agenda, Eide said that the talks are continuing at a steady pace, and added: "The main focus now is to conclude the agreement with little disruption as possible on the property side between the Turkish Cypriots and with the Greek Cypriot position, which had lost their homes before 1974 or other times. We are seeking for ways to identify exactly who will be entitled to reinstatement [of property] and who will be getting other types of compensation."

Eide reiterated various times during the conversation that he is very optimistic, and further emphasized that the leaders are getting very close to an agreement in the upcoming months. Eide refrained from expressing his opinion on whether Greek Cyprus supporting Russia after Turkey downed a Russian aircraft for violating Turkish airspace and criticizing Turkey would have repercussions. He said that this topic was also discussed during his meeting with Turkish officials.

Eide said he is very hopeful about the reunification talks as the political tensions on the long-divided island have eased since talks resumed after May 11 with a dinner Eide hosted in Nicosia's neutral buffer zone. On May 28, the leaders agreed on a five-step plan to resolve the Cyprus issue following a meeting hosted once again by Eide, and ever since then, talks have been ongoing at a steady pace as Eide mentioned. Next on the calendar for the leaders is the upcoming referendum at end of March which would establish of a new Cypriot constitution if passed. Regarding the referendum, Turkey's EU Minister and Chief Negotiator Volkan Bozkır also made comments to EurActiv on Monday and said that the referendum will be successful as the reunification of the island will open new opportunities for Turkey's EU integration.
Last Update: Dec 11, 2015 11:41 am
RELATED TOPICS