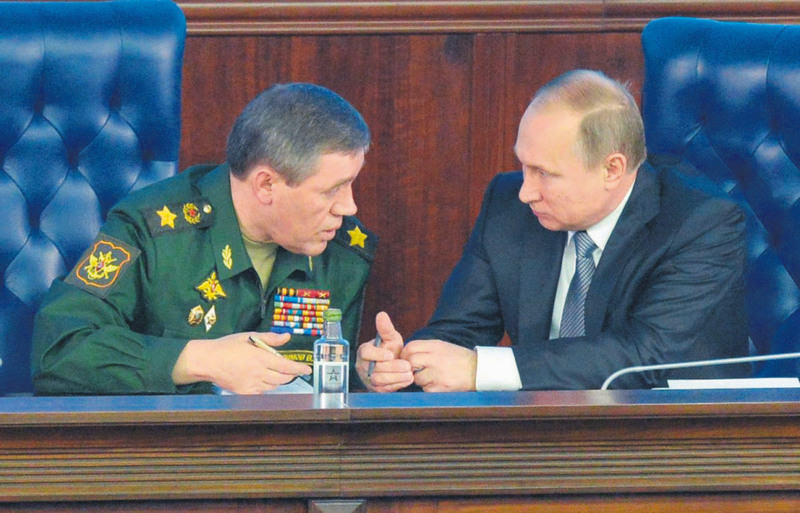 Russian President Putin (R) talks with the Chief of Russian army general staff Gerasimov (L), during a Defence Ministry board meeting in Moscow on Friday.
by Daily Sabah with Wires Dec 12, 2015 12:00 am

As Russia continues to take an aggressive approach toward Ankara, FM Çavuşoğlu called on Moscow to act reasonably and said Turkey's ‘patience is not unlimited'. He added that if Turkey is not taking retaliatory measures, it is not because of fear or guilt

Foreign Minister Mevlüt Çavuşoğlu on Friday urged Moscow to react calmly after Turkey downed a Russian warplane over the Syrian border, saying Ankara's patience with Moscow was "not unlimited."

"We are calling on Russia, our major trade partner, for calm. But we also say that our patience is not unlimited," he told the private NTV station in an interview.

"If we are not retaliating to what you [Russia] have so far done, it is not because we are scared or have any feeling of guilt," he added.

Moscow has imposed a series of economic sanctions on Ankara after Turkish fighter jets shot down a Su-24 bomber on the Syrian border on Nov. 24, sparking the biggest crisis between the two countries since the Cold War.

Ankara says the Su-24 plane repeatedly violated Turkish airspace, but Moscow insists it never strayed from Syria. Turkey so far has not hit back with sanctions measures of its own.

Russian ships, including naval warships, are still traveling through the Bosporus. While Moscow starting in 2016 will re-impose visas for Turks in a retaliatory move, Russians remain able to travel to Turkey without visas.

"We are acting with patience in order to return our relations to [what they were in] previous days," Çavuşoğlu said.

But he criticized Moscow for using every platform to target Turkey after the plane crisis, including its bringing a controversial Turkish troop deployment in Iraq to the agenda of the U.N. Security Council (UNSC).

Russia called for the informal talks Tuesday, but the United Nations Security Council did not take a stand on the dispute.

Çavuşoğlu said that since the UNSC refused to issue a statement urging Turkey to respect Iraq's sovereignty meant Russia had been "disgraced."

Prime Minister Ahmet Davutoğlu on Wednesday said that Russia is trying to carry out ethnic cleansing in Latakia, Syria against the Turkmens in the region. "They want to expel them, they want to ethnically cleanse this area so that the [Syrian] regime and Russian bases in Latakia and Tartus are protected," he said, speaking English.

Davutoğlu told foreign reporters in Istanbul that the Russian airstrikes were strengthening DAESH in Syria and that Turkey's coordination with the United States in the fight against the terrorist organization has improved.

Commenting on the Russian jet downed by the Turkish military, Davutoğlu said: "We are ready to work" with Russia to prevent a repeat of such an incident in the future. But he also warned that without proper coordination over operations in Syria there will always be a risk of "accidents or unintentional confrontation."

Moscow has recovered the black box from the Russian jet downed by Turkey last month and will analyze it with "foreign specialists," Russian President Vladimir Putin said. "I ask you not to open it for the time being," Putin told Russian Defense Minister Sergei Shoigu at a meeting in which he was presented with the black box, Russian news agencies reported. Putin said an analysis of the black box would help determine the downed jet's flight path and position, which Ankara and Moscow have disagreed on."Whatever we learn [from the black box] won't change our attitude to what the Turkish authorities did," the Russian strongman said.

Russia began airstrikes in Syria on Sept. 30 to prop up the regime of Syrian President Bashar Assad in a civil war that has killed more than 250,000 people.
RELATED TOPICS