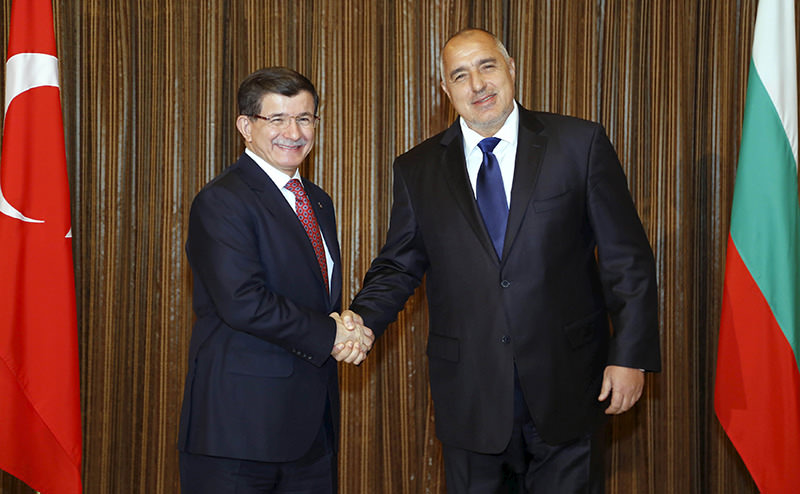 by Anadolu Agency Dec 15, 2015 12:00 am
Prime inister Ahmet Davutoğlu on Tuesday praised the "fertile cooperation" between Turkey and Bulgaria during the refugee crisis.

"People, who are fleeing from both a barbaric regime and pressure from terrorist groups, flock into Turkey, Bulgaria and Europe," he said at a news conference with Bulgarian counterpart Boyko Borisov in Sofia.

"There is a quite fertile cooperation between Turkey and Bulgaria," he said.

The prime minister said that the flow of people into Europe was a global problem that the world should try to solve.

"Otherwise, the refugee problem may turn into a bigger problem that we will all be faced with in the coming years," Davutoğlu said.

"Our dream is building a high-speed rail line from Istanbul to Sofia and from Sofia to Europe," he told journalists. "We are determined to link Bulgaria and Turkey through highways and transport routes."

He added: "Hopefully, when Turkey joins the EU, we will make common cause with Bulgaria."

Borisov praised the work done between the two countries to combat human trafficking.

Turning to the diplomatic row between Turkey and Russia following the downing of a Russian jet last month, Borisov said: "There must be peace and calm around the Black Sea."

Davutoğlu reiterated Turkey's call for reduced tensions with Russia. "We hope that traditional friendly and neighborly relations between Turkey and Russia are reestablished again and that all problems are solved face to face with understanding and without accusation."
Last Update: Dec 15, 2015 8:41 pm
RELATED TOPICS