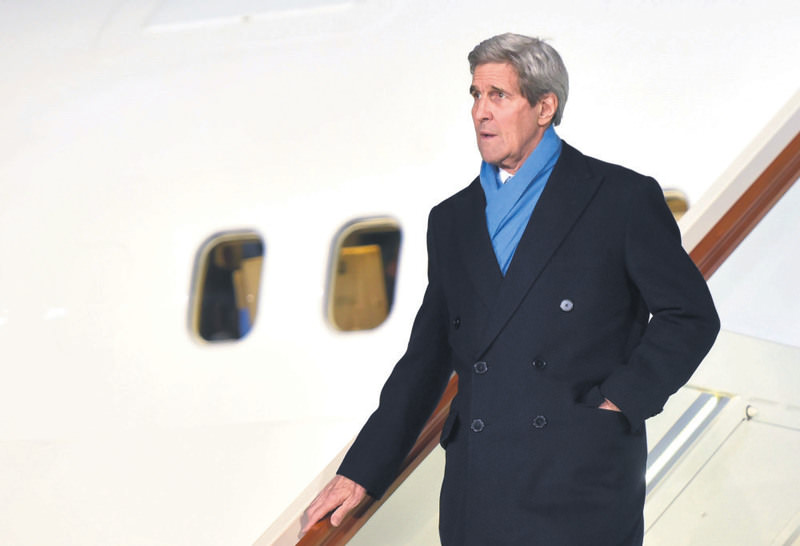 by Daily Sabah with Wires Dec 16, 2015 12:00 am
U.S. Secretary of State John Kerry reportedly discussed the need to reduce tensions between Moscow and Ankara during his meeting with Russian President Vladimir Putin Tuesday.

White House spokesman Josh Earnest told reporters: "This will be something that Secretary Kerry will discuss with President Putin when he's in Moscow tomorrow, again, the continuing need for the Russians to de-escalate their tensions with the Turks."

Relations between Moscow and Ankara have been heightened since the Nov. 24 downing of a Russian jet by Turkish forces. Turkey has maintained that the aircraft violated its airspace, and was repeatedly warned before it was fired upon.

In response, Russia has implemented a number of punitive economic measures against Turkey. "I think it's fair to say that there is work that both sides probably need to do in that regard [de-escalation], but I think it's notable that in the weeks since that occurred, we haven't seen any tangible escalation at this point," Earnest said, "That's a glimmer of optimism in that situation."

On Sunday, Russia said sailors aboard its Smetlivy guided-missile destroyer fired small arms as a warning to avoid a collision with a Turkish fishing vessel some 22 kilometers off the coast of the Greek island of Lemnos.

"Even when there have been differences between us, we have been able to work effectively on specific issues," Kerry said as he began a series of what are expected to be difficult discussions in the Russian capital. "Today, I hope we can find some common ground."

Russia and the U.S. are at odds over the mechanics of a political transition aimed at halting the war in Syria as well as the military approach to fighting DAESH. The results of Tuesday's meetings will determine whether or not a new international diplomatic conference on Syria will go ahead as planned at the United Nations on Friday.

On Ukraine, the two countries are split over the implementation of a February agreement meant to end hostilities between Kiev and Russian-backed separatists in the east.

Lavrov said there are "outstanding issues" on steps ahead in the Syrian political transition that is supposed to bring representatives of Syrian President Bashar Assad's government together with the opposition for negotiations by early January. And on Ukraine, Lavrov said the U.S. should use its influence with the government in Kiev to settle the conflict with Russian-backed separatists by respecting the shaky cease-fire and moving ahead with political reforms in the east of the country.

Kerry praised Moscow for having been "a significant contributor to the progress that we have been able to make" on Syria and said the U.S. and Russia both believe the DAESH must be eliminated.

"Russia and the United States agree that this is a threat to everybody, to every country," he said, "They are the worst of terrorists. They attack culture and history and all decency. It leaves no choice but for civilized nations to stand together to fight and destroy them."

However, ahead of his arrival, Lavrov said Moscow would be looking for a "revision" in U.S. policy "dividing terrorists into 'bad' and 'good' ones." It also complained that the U.S. was unwilling to engage in "full-fledged coordination" between the two powers' militaries while both are conducting airstrikes in Syria.

Russia says its airstrikes since late September have targeted DAESH, but Western governments claim mostly moderate rebels are being hit and that Moscow is primarily concerned with shoring up Assad.
RELATED TOPICS