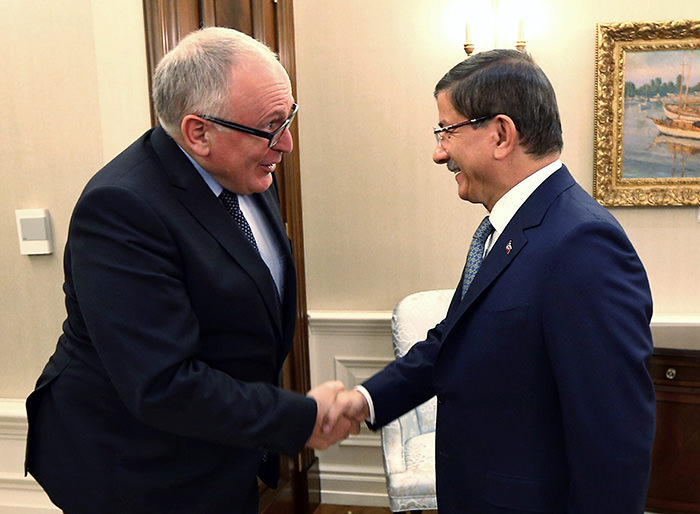 Turkeyu2019s Prime Minister Ahmet Davutoglu, right, greets European Commissionu2019s Frans Timmermans before a meeting in Ankara, Turkey, Wednesday, Nov. 11, 2015 (AP Photo)
by Daily Sabah Dec 17, 2015 12:00 am
The EU official who has led talks with Turkey on the migrant crisis said he was "strongly encouraged" by a meeting with Prime Minister Ahmet Davutoglu on Thursday at which the two sides discussed a voluntary resettlement scheme for Syrian refugees.

The meeting, held at the Austrian embassy in Brussels before a broader EU summit, was attended by nearly a dozen European leaders, including Chancellor Angela Merkel, who is counting on Ankara to stem the flow of hundreds thousands of Syrians from Turkey into Greece and onward to Germany and other EU countries.

The deputy head of the European Commission, First Vice President Frans Timmermans, who has led EU executive's negotiations with Turkey and attended the "mini-summit", expressed hope that the deal would work.

"For us it is important to continue work with Turkey on the implementation of the action plan," Timmermans said. "I'm strongly encouraged to do that because of the positive and proactive attitude of Prime Minister Davutoğlu."

Speaking to press on Thursday, Prime Minister Ahmet Davoğlu said that the refugee crisis is not solely Turkey's problem, but it is also a problem which the European states are obliged to find a solution for.

Another official who attended the meeting with Davutoğlu said the leaders agreed tentatively that the Netherlands, which takes over the EU presidency from Luxembourg next month, would invite all 28 EU member states to a meeting next year to discuss the resettlement plan, with the aim of discussing it at the bloc's next regular summit in mid-February.

"All agreed that is a common task to handle the refugee crisis and reduce illegal migration," the official said.

Germany, by far the top destination for asylum seekers in Europe, has been the driving force behind the voluntary resettlement idea, saying it would help Turkey, as well as EU member states to have more control over who gets to Europe.

Highlighting the cooperation between Germany and Turkey Davutoğlu said, "Turkey and Germany to hold high-level cooperation meeting in Berlin on Jan. 22," and added another trilateral meeting was to be held between Turkey, Bulgaria, and Greece in February 2016 in Turkey's Izmir province.

Meanwhile, speaking at the 3rd Meeting of the Syria Coordination Committee in Ankara on Thursday, Deputy PM Yalçın Akdoğan said, "Currently 300,000 Syrian students are placed in our education system. We want to reach 460,000 students at the end of the school year."

"All Syrian people in Turkey have health insurance. We have provided 11 million Syrians with health care services so far," Akdoğan added.