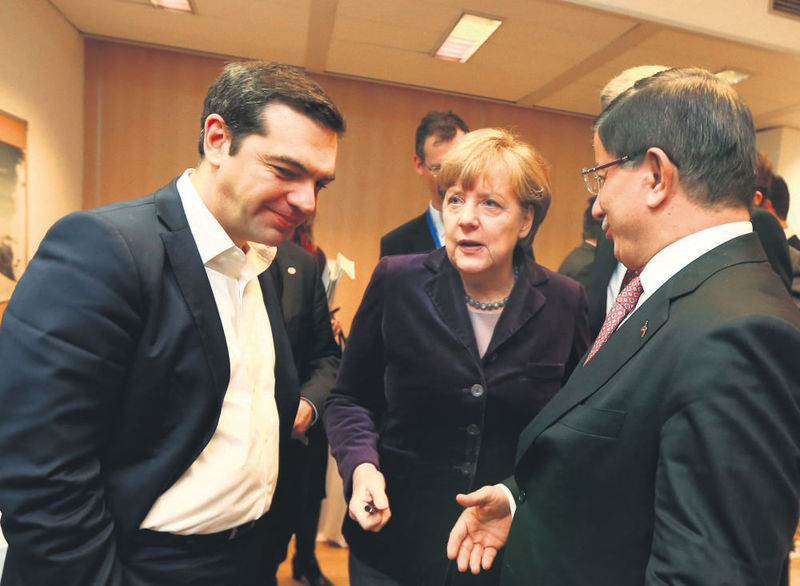 by Daily Sabah Dec 18, 2015 12:00 am
Prime Minister Ahmet Davutoğlu held a 30-minute, closed-door meeting on Thursday with his Greek counterpart Alexis Tsipras in Brussels to discuss the refugee crisis as EU officials have made positive remarks on Turkey's role in the issue.

In a meeting held at the Austrian Embassy, many EU leaders, including German Chancellor Angela Merkel, came together with Davutoğlu and his attitude was praised by the deputy head of the European Commission, First Vice President Frans Timmermans as "strongly encouraging." Despite more needing to be done in the action plan, Timmermans expressed hope that the deal would work. "For us it is important to continue work with Turkey on the implementation of the action plan," Timmermans said.

Furthermore Merkel expressed confidence after talks with Davutoğlu that Ankara would do its part to bring about a sharp reduction in the number of illegal migrants entering the European Union and described the talks as positive, saying "This meeting was very good"

Speaking before the meeting with the Greek leader, Davutoğlu stressed that there are various common issues between the two countries, especially the refugee issue, saying, "At the summit in Brussels two weeks ago, significant decisions were taken between Turkey and the EU concerning the visa-free travel for Turkish citizens, readmission agreement and the Turkey-EU common action plan. This is a common agenda between Turkey and Greece, this is bound with friendship and a common destiny."

Davutoğlu indicated that the two countries will work together as two friendly countries in Europe and added, "This cooperation will favor Europe. This is important for stability in the Eastern Mediterranean. I thank Mr. Tsipras for his active approach in bilateral relations. We will hold many meetings in Istanbul, Athens, Ankara and Thessaloniki."

Regarding Davutoğlu's remarks, Tsipras said it is very important to share opinions with him and said, "Cooperation with regards to decreasing the refugee flow and especially the flow in the Aegean Sea is a very critical issue for our region and Europe."
Last Update: Dec 18, 2015 1:10 am
RELATED TOPICS