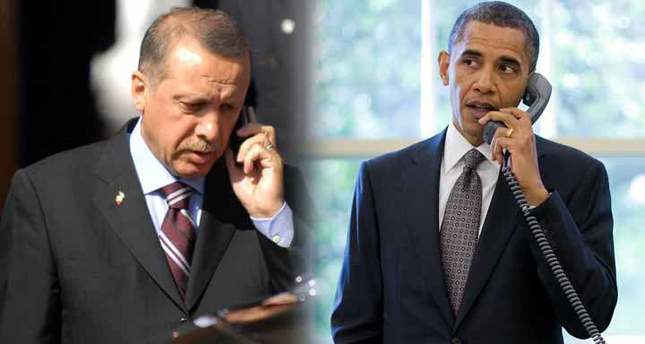 by Daily Sabah Dec 18, 2015 12:00 am
U.S President Barack Obama made a phone call to President Recep Tayyip Erdoğan late Friday, in which both presidents reiterated their commitment to coordinate military efforts against Daesh, the White House said

"The President spoke by phone today with President Recep Tayyip Erdogan of Turkey to discuss the current dispute between Turkey and Iraq over recent Turkish military moves in northern Iraq," the statement said, adding that Obama asked President Erdoğan to take additional steps to deescalate tensions with Iraq and step up the withdrawal of Turkish military forces from Northern Iraq.

"To this end, the two leaders agreed to work together on diplomatic efforts between the United States, Turkey, and Iraq to reduce tensions and to coordinate military efforts against ISIL," the White House added in the statement, using an alternative acronym for the Daesh terrorist organization.


The statement also said that Obama stressed the value of Turkish contributions to the counter-Daesh campaign.

"The two leaders also discussed intensifying cooperation on Syria, including joint efforts to strengthen the moderate Syrian opposition and step up pressure on ISIL, as well as continued efforts to create conditions for a negotiated solution to the conflict," the statement concluded.