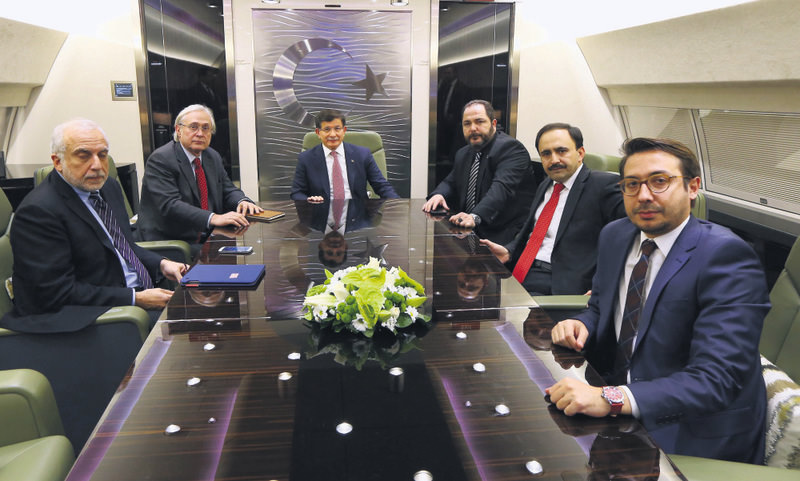 Commenting on Russian President's vulgar and threatening rhetoric targeting Turkey, PM Davutoğlu said Putin's statements are not worthy of a response since his stance was completely different before Turkey downed one of its fighter jets after it violated Turkish airspace. ‘I guess Putin thinks he is in the days of the KGB. The world mockingly smiles at the statements he makes,' he added

Prime Minister Ahmet Davutoğlu commented on Moscow's harsh stance regarding Turkey to a group of journalists who accompanied him while returning from Brussels to Turkey on Thursday, saying that Russian President Vladimir Putin's recent accusations and threats against Turkey are not worthy of a response since the Russian president's stance was completely different before Turkey downed one of its fighter jets upo its violation of Turkish airspace.

Putin's domineering attitude reached its peak on Thursday. "If someone in the Turkish leadership decided to lick the Americans in a particular place, well I don't know then, was that the right decision or not? I don't even know if the Americans wanted this or not," Putin said in his annual wide-ranging year-end news conference on Thursday, referring to Turkey's downing of the Russian warplane.

When asked to comment on Putin's vulgar rhetoric and threats against Turkey, Davutoğlu said: "In such cases, I do a comparison to see if it is worth taking into account. Would Putin have made the same statement a month ago? Sure, something [the downing of the Russian jet] happened on Nov. 24. Suddenly, he realized that Turkey is a Muslim country," referring to Putin saying that President Recep Tayyip Erdoğan is trying to make Turkey a Muslim country. "He [Putin] suddenly realized that we are a close ally of the United States. To take an approach seriously, such a statement should have been made outside of the conjuncture. Thus, I don't take any of Putin's words seriously."

Davutoğlu said Putin making statements, which were "null" for him a month ago, in a "childish" way shows his Soviet mindset. "I guess Putin thinks he is in the days of the KGB. The world mockingly smiles at the statements he makes. They are nothing that we can take seriously and it does not suit Russian-Turkish relations or the soul of the modern day.

After Turkey downed the Russian jet, Putin quickly imposed trade sanctions, canceled visa-free travel for Turkish citizens and deported many Turks who arrived in Russia. Turkish leaders described this attitude as "emotional" and not the response of a mature leader. The Russian military later distributed satellite images and accused Turkey of buying oil from DAESH. However, officials from Northern Iraqi's Kurdistan Regional Government (KRG) quickly denied the accusations and said the images showed KRG trucks carrying oil to Turkey. Ahmet Davutoğlu said the Russian accusations that Turkey profits from the oil trade with DAESH are reminiscent of the lies produced by the "the Cold War-era Soviet propaganda machine."

"No one believes the lies of the Soviet propaganda machine" he said, describing them as like the lies found in the Pravda daily that aimed to cover up their problems with their neighbors.

Turkey's border security starts from across the border

Ankara is after dialogue with Baghdad in terms of the presence of Turkish troops near Mosul, but the Iraqi government is unable to protect its borders, Davutoğlu said, adding: "We have to accept the fact that Turkey's border security starts from the other side of the border. We hoped they could secure the border so we would not have to send troops there." He added that if Turkey does not maintain security in Northern Iraq from the PKK and DAESH threat, it would mean a lack of security for Turkey.

We'll make people feel that the state is with them

Military operations against the PKK in provinces in the southeast will continue and the government will compensate the losses of people in the region, including business premises and children, who are unable to go to school due to curfews, will also get extra classes during the summer to not fall behind, PM Davutoğlu said. "We want to win the hearts of those children and business owners. We will discuss the issue at the Cabinet meeting on Monday. Until then, all humanitarian needs will be delivered to the region," he said.
RELATED TOPICS