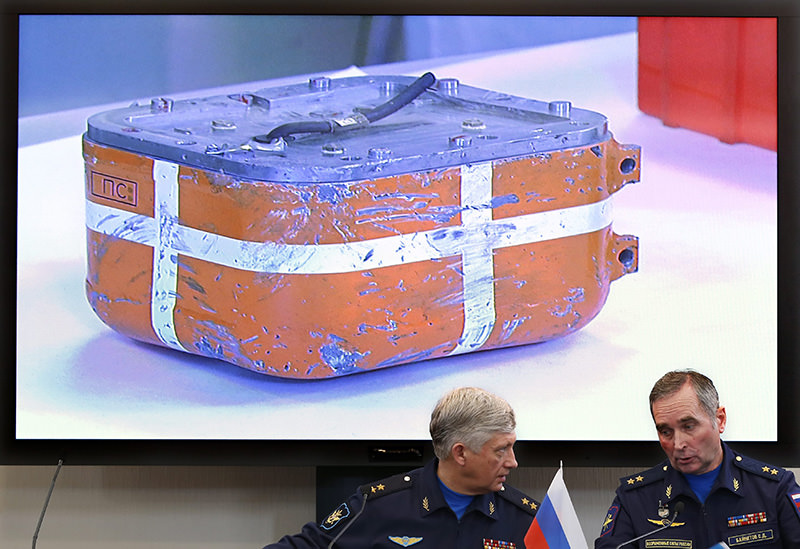 Russian officials have announced their failure to retrieve any information from the black box of the fighter plane downed by Turkey. However one of the foremost experts in cryptology discounted Russian remarks as unconvincing

Russian investigators Monday announced their failure to retrieve any information from the black box of the Russian fighter jet that violated Turkish airspace before being shot down. While the Kremlin was sure that any information would back its claims that there had been no airspace violation, many assumed its failure to do so would result in a statement similar to the one released yesterday. Professor of Cryptology Çetin Kaya Koç from the University of California, Santa Barbara, dismissed Russian protestations that they could not retrieve information from the black box, describing Russian technical expertise as world class.

"If they bring the box to me, I'll be glad to retrieve all the relevant information," he said, adding that the only excuse he deemed realistic was that Russians did not want to recover the data in the first place. Turkey shot down the Russian Su-24 bomber over the border with Syria on Nov. 24 after it violated Turkish airspace despite repeated warnings. Russia insists the plane never entered Turkish airspace.

Turkey and NATO's radar records prove Turkey's version of events. Russian President Vladimir Putin previously said: "Whatever we learn [from the black box] won't change our attitude to what the Turkish authorities did." Lt. Gen. Sergei Bainetov, a deputy head of the Russian military's flight safety service, said on Monday that an inspection of the recorder has revealed that 13 of the 16 microchips on its data board are nearly ruined and the remaining three are damaged. He said experts will attempt to retrieve information from them, but the effort will take a long time.

Turkey downing the Russian warplane came weeks after Moscow deployed fighter jets in Syria to fight alongside the regime of Syrian President Bashar Assad. Instead of striking DAESH targets, they started hitting opposition groups, including Turkmens in northern Syria. Similar to what happened in Georgia and Ukraine, many civilian casualties were reported from Russian aggression in Syria. Records show that violating other countries' airspace is very common for Russian fighter jets, but Ankara chose live fire when its airspace was violated by the Russian warplane coming from Syria.

Putin quickly imposed trade sanctions, canceled visa-free travel for Turkish citizens and deported Turks who arrived in Russia. This attitude was described by Turkish leaders as "emotional" and not the response of a mature leader. The Russian military later distributed satellite images and accused Turkey of buying oil from DAESH. Iraqi Kurdish officials, however, quickly denied the accusations and said they were trucks from the Kurdistan Regional Government (KRG) carrying oil to Turkey. Prime Minister Ahmet Davutoğlu said the Russian accusations that Turkey is profiting from the oil trade with DAESH are reminiscent of the "lies" produced by the "the Cold War-era Soviet propaganda machine."

"No one believes the lies of the Soviet propaganda machine," he said, describing them as Pravda-style lies aimed to cover up their problems with their neighbors.

Putin's domineering attitude reached its peak on Thursday. " But if someone in the Turkish government decided to lick the Americans in a certain place, well I don't know then, was that the right decision or not. I don't even know if the Americans wanted this or not," Putin said, referring to the downed Russian warplane.

Putin made it clear that Russian sanctions would stay in place for some time, explaining that it will be hard for the Kremlin to reach any kind of agreement with the current Turkish leadership, which he accused of "creeping Islamization" that would have the secular state's founder, Mustafa Kemal Atatürk, turning in his grave.

Foreign Minister Mevlüt Çavuşoğlu has condemned Russia for Sunday's airstrikes in Syria's northwestern province of Idlib. In a written statement, Turkey's top diplomat said Monday that around 200 civilians had been killed and buildings damaged. "Russia mainly targets the moderate opposition in Syria since it entered Syria on Sep. 30, 2015. Meanwhile, civilian residential areas have been increasingly targeted as well," the statement read.

Çavuşoğlu said Russian operations, which followed a U.N. endorsement of a Syrian peace plan reached on Dec. 19, had happened before the "ink had dried" on the document. Describing Russia's actions as "insincere, to say the least," he said such strikes need to stop targeting the moderate opposition and civilians, otherwise the conflict will continue for years.