Ankara's agenda occupied with visit from top US military official 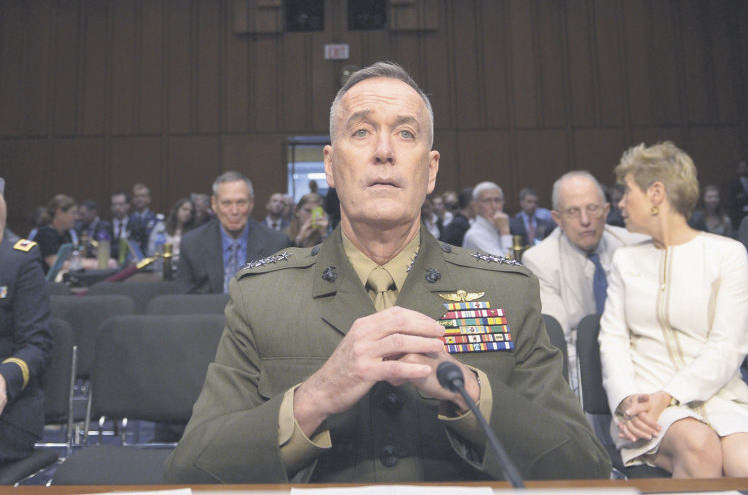 by Merve Aydoğan Jan 06, 2016 12:00 am
With the ongoing crisis in Syria and recent tensions between Saudi Arabia and Iran, U.S. Chairman of the Joint Chiefs of Staff, Joseph F. Dunford (above), arrived in Ankara on Tuesday with a busy schedule of talks with Turkish officials, including his counterpart Hulusi Akar and Defense Minister İsmet Yılmaz. Dunford arrived on Tuesday and will hold a series of official meetings on Wednesday beginning with Akar, as well as several other top military officials at the General Staff in Ankara. Following the execution of Saudi Shiite cleric Sheikh Nimr al-Nimr by Saudi Arabia on Saturday, tensions between Shiite Iran and Sunni Saudi Arabia – fierce regional rivals who support opposing sides in the conflicts in Syria and Yemen – heightened.

Additionally to the tensions between Iran and Saudi Arabia, the region continues to experience crisis due to the ongoing situation in Syria and Iraq. In this regard, Dunford's visit is perceived to happening at a significant time.Dunford will also meet with Prime Minister Ahmet Davutoğlu on Wednesday. Along with regional developments, Dunford will also address the coalition fighting DAESH. Following Turkey's downing of a Russian aircraft for violating its airspace despite numerous warnings, tensions between Turkey and Russia continue to grow due to heightened rhetoric from the Kremlin. Dunford will discuss recent developments with Russia and its involvement and support to the Syrian regime. On Dec. 4, 150 Turkish soldiers equipped with heavy weapons arrived on the outskirts of the DAESH-held city of Mosul in Northern Iraq to train forces, but Baghdad demanded their immediate withdrawal, citing a breach in sovereignty. Iraq further gave Ankara a 48-hour ultimatum to withdraw the forces or face "all available options." The tensions between Turkey and Iraq continue to hold significance, as Ankara has not withdrawn the forces. Dunford will discuss the issues causing tensions between Turkey and Iraq.

Dunford is also expected to visit İncirlik Air Base and will also address the PKK Syrian affiliate Democratic Union Party's (PYD) attempts to establish control over all territory lying between the northern Syrian towns of Azaz and Jarabulus near the border with Turkey. President Recep Tayyip Erdoğan and Davutoğlu, as well as other government officials, continue to reiterate that Turkey will take all necessary actions against the PYD to prevent it from establishing power around the Azaz- Jarabulus area.

Ankara is experiencing high diplomatic and military traffic with French Minister of Defence Jean-Yves Le Drian also arriving in Ankara on Tuesday. He met with Davutoğlu as well as Foreign Minister Mevlüt Çavuşoğlu. The diplomatic traffic in Ankara will continue with an official visit by U.S. Vice President Joe Biden on Jan. 23 to meet with Erdoğan and Davutoğlu.
RELATED TOPICS