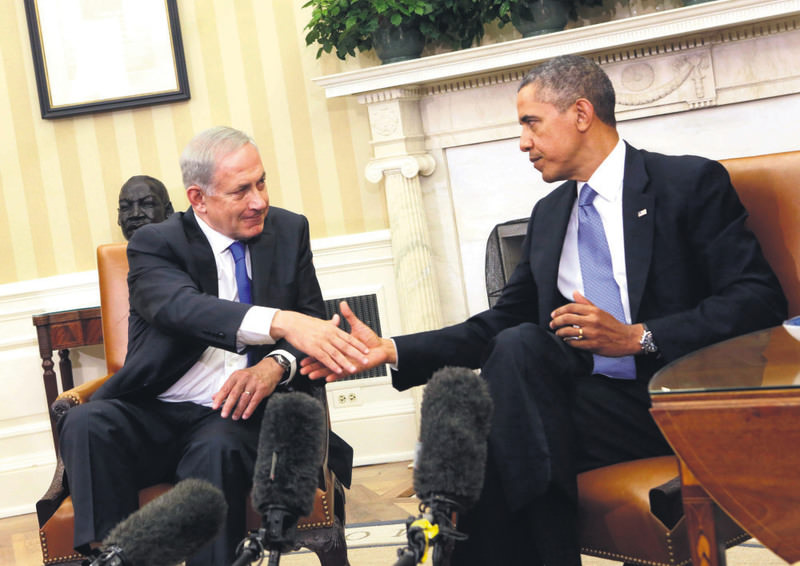 Israeli Prime Minister Netanyahu (L) and U.S. President Obama meet in the Oval Office of the White House after a bilateral meeting in Washington in 2013.
by Ragıp Soylu Jan 06, 2016 12:00 am

Washington welcomes accelerated joint efforts from Ankara and Tel-Aviv to mend their sour relations and is optimitic about it. Possible improvement in relations could also work positively for Turkey in terms of its image in the U.S. before its presidential elections later in 2016

Turkey's recent reconciliation efforts with Israel over the four-year-old Mavi Marmara dispute came as a move long-anticipated by Washington, which could bolster Turkey's image in the country before the presidential elections. Former and current American officials declared that they want to see both countries resolve differences and renew their ties in an increasingly volatile region. The news related to such talks was leaked to the Israeli press in mid-December, ushering in a preliminary agreement between the two countries. Since then the negotiations over easing the blockade on Gaza – a key Turkish demand – are ongoing.

Turkish President Tayyip Erdoğan last week told a group of Turkish journalists that Turkey would agree upon some flexible solutions to the Gaza problem, such as allowing Turkish goods, including construction material, to enter Gaza and docking a Turkish ship at a Gaza port to compensate for energy shortages in the city. This has also increased the positive expectations about the talks in Washington.

U.S. State Department spokesperson John Kirby, last month, welcomed the negotiations between "two key American allies in the region." But both the White House and the State Department refused to comment further on the details. Although American officials privately seem to have an encouraged outlook on the process they prefer to remain silent and publicly treat this issue as a bilateral Israeli-Turkish problem rather than an American one. Ambassador Dennis Ross , a former senior diplomat whose past efforts are seen as historically important regarding Israeli-Palestinian issues, said that there has been a long-standing desire on the part of the U.S. to see reconciliation take place. He said, "Having reconciliation between the two countries could be one of the pillars that one could build on to start to restore over time the greater stability in the region." Despite the optimistic comments on the issue a cautious approach is also common in Washington, since Israel and Turkey held similar talks on numerous occasions and they weren't very fruitful. One of the talks reached a preliminary deal in February 2014 when Israeli Prime Minister Benjamin Netanyahu on purpose delayed to conclude the final written agreement between the two countries. Three months later the Jerusalem Post reported that the agreement would be finalized after Netanyahu's return from Japan, but later he decided not to sign. Analysts believed Netanyahu wasn't eager to compile with such agreement due to elections in the country in which opposition parties were accusing him of being weak.

Kadir Üstün, the executive director of the Foundation for Political, Economic and Social Research (SETA) in Washington, an influential think tank seen as closely tied with the Turkish government, said the ongoing regional turmoil has required regional actors to adjust their positions and adopt the new realities on ground. However, he also noted that there is still a possibility that Turkey and Israel may not reach a final deal, especially because of the strong disagreements over the Gaza blockade. He said, "Washington would like to see a rapprochement and normalization of relations between Turkey and Israel. For the administration's anti-ISIS [DAESH] campaign to succeed, the Obama administration needs its regional allies. A working relationship between the two countries would provide the U.S. administration with more room to maneuver. But again, there needs to be caution about how much a Turkey-Israel normalization can achieve."Of course a possible Turkish-Israeli reconciliation has far more results than just being a bilateral issue. Turkish-American relations have been getting through a tumultuous path due to disputes over PKK linked Syrian Kurdish and armed group, the People's Protection Units (YPG). Turkey sees this group as a threat against its territorial unity while the Obama administration praising them as heroes against DAESH. Ross, now a fellow at the Washington Institute, said that Turkey's willingness to renew ties with Israel would basically a source of a general assurance in Washington on Turkey's orientation in the region, which might decrease the tensions between two key NATO ally on Syria.

U.S. Chairman of Joint Chiefs General Joseph Dunford today will visit Ankara to discuss both countries efforts to counter DAESH in the region. American officials have been pressuring Turkey to seal the Turkish-Syrian border and asking Turkish Air Force to increase its aerial activities in Syria. Turkish F-16s are basically grounded since Turkey's downing of the Russian Jet in Syrian border due to substantial Russian threats. The YPG's recent seizure of Tishreen dam also agitated Turkey's previously declared redline which banned the group crossing the west bank of the river Euphrates. Vice President Joe Biden will also visit Ankara in two weeks and might seek a partial revise on Turkish redlines in Syria, especially on DAESH-held town Manbij, which is used by the group as an important resupply line.

Henri Barkey, the director of the Middle East Program at the Wilson Center in Washington, said Turkey and the United States would still need to bridge their differences on Syria even Israeli negotiations were to conclude positively. Barkey, also said that a possible reconciliation between two regional powers would be a good sign for Cyprus, where both Turkish and Greek sides are trying to reach a final solution for the fate of divided island. The Israeli press previously reported that Israel and Turkey were negotiating on a pipeline to sell Israeli gas to Europe through Turkey. Cyprus is expected to be an important player in any future energy projects in the Eastern Mediterranean.
Last Update: Jan 06, 2016 2:40 am
RELATED TOPICS