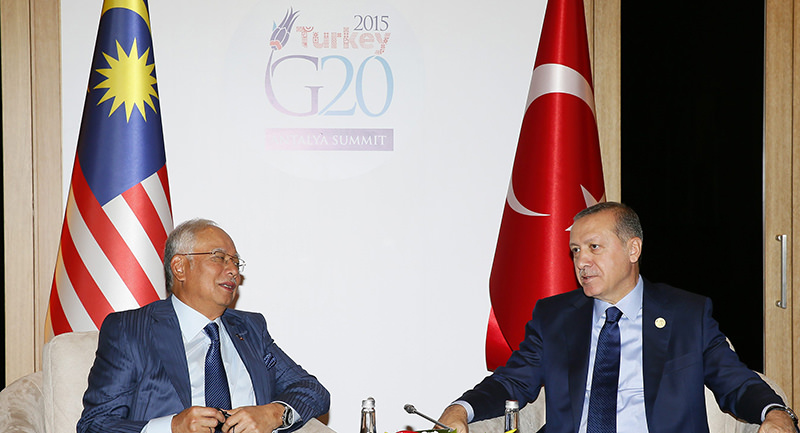 President Recep Tayyip Erdou011fan with Malaysian Prime Minister Najib Razak at the G20 Summit in Antalya (AA Photo)
by Daily Sabah with AA Jan 15, 2016 12:00 am
One day after a Daesh-linked suicide bomber struck a mall in the center of Indonesia's capital, Turkey's president has underlined the importance of international cooperation in the fight against terrorism in a phone call with Malaysia's prime minister.

On Friday, the Turkish presidency said in a statement sent to Anadolu Agency that Najib Razak had called Recep Tayyip Erdoğan to condemn those behind recent terrorist attacks in Turkey that left 15 people dead

"In a phone conversation, Malaysian Prime Minister Najib Razak condemned the attacks in Istanbul and in Diyarbakır and conveyed his condolences," the statement read.

It said that in return, Erdoğan had said international cooperation is obligatory in the fight against terrorism, highlighting Thursday's attack in Jakarta in which seven people -- five of them Daesh linked terrorists-- died.

"We convey our condolences to the people of Indonesia, victims' families and wish a speedy recovery to those injured," the statement said.

One of the attackers was reported to be have been carrying a black Daesh flag.

The statement said that during the phone call, Erdoğan had said Turkey is delighted to strengthen its relations with Malaysia on every aspect, including fighting terrorism.

He invited Razak to the Organization of Islamic Cooperation's 13th Summit in Istanbul, to be held April 10.

Malaysia has detained more than 130 people suspected of links with Daesh or other militant groups since last year.

In December, it detained five people -- including a European teacher -- on suspicion of links to terrorism.

Turkey has been doing its part to identify and stop potential foreign fighters seeking to cross the border to Syria to join Daesh, despite little cooperation on intelligence sharing with its Western allies. As part of Turkey's efforts, police have tightened security at transfer points such as airports, terminals, bus stations and rental car companies.

Turkish security forces have stopped over 36,500 terror suspects heading to join terrorist organization Daesh in Syria and most suspects were stopped from entering Turkey at the border, while over 3000 were arrested and deported.