US and Turkey prepared for military solution in Syria, Biden says 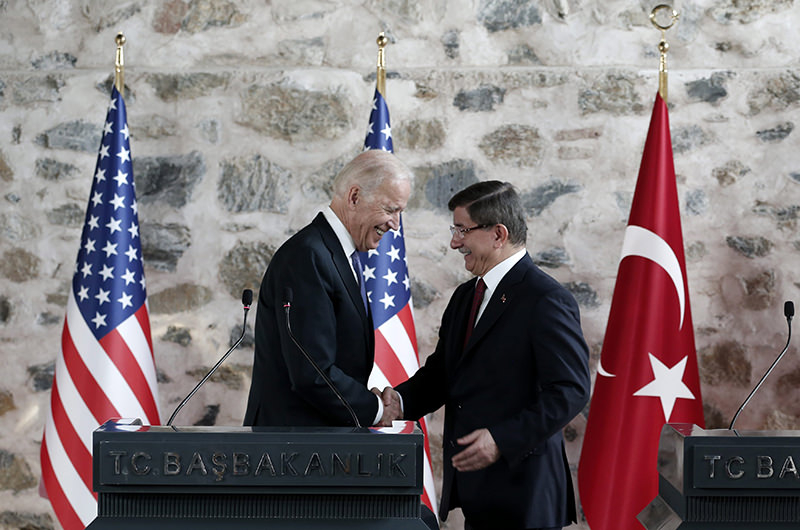 |EPA Photo
by daily sabah
Jan 23, 2016 12:00 am
U.S. Vice President Joe Biden said in a meeting with Turkish Prime Minister Davutoğlu in Istanbul that the United States and Turkey were prepared for a military solution in Syria if a political settlement was not possible.

"We do know it would better if we can reach a political solution but we are prepared ..., if that's not possible, to have a military solution to this operation and taking out Daesh," Biden said at the news conference.

Davutoğlu said that he emphasized to Biden that there is no state authority beyond Turkey's borders with Iraq and Syria.

He said that Turkey sees three elements as a threat to its national security, listing them as the Syrian government, which led to the flow of refugees with its oppression and cruelty, the Daesh terror organization, and PYD.

Davutoğlu said that Turkey sees the PYD as a threat because it has suppressed or ethnically cleansed the Kurds who do not think and act in line with them, and has engaged in acts to support terrorism within Turkey. He added that Turkey have stressed to Biden clearly that YPG, the armed wing of PYD, is an extension of PKK.

Turkey is determined to do what is necessary to protect its national security from threats, he added.

U.S. Vice President Joe Biden said that the PKK is a threat to Turkey like Daesh, condemning them as "a terror group plain and simple".

Daesh "is not the only existential threat to the people of Turkey, the PKK is equally a threat and we are aware of that.. it is a terror group plain and simple and what they continue to do is absolutely outrageous," Biden said, referring to the terror organization's recent strategy of disrupting security and socio-economic activities in selected urban locations. He added that that there is no difference between Daesh, PKK and al-Nusra.

Reiterating that Turkey was a "strategic partner" of the U.S., Biden said Turkey has been taking "very important" steps to improve security. Biden said Daesh was not only a danger to Europe but more particularly to Turkey.

However, Biden explicitly avoided mentioning PYD or YPG in speech, which can be interpreted as a sign of the different views among two NATO allies still continue.

Regarding the peace talks in Syria, Davutoğlu said that it is very important both for the U.S. and Turkey that Syrian opposition is formed out of legitimate elements, ruling out groups involved in terror activities.

Davutoğlu said that the Turkish military was in Iraq to ward off Daesh, reiterating that Ankara respects Iraqi territorial unity. He also thanked Biden for visiting Cyprus, adding that the United States will have an important role in Cyprus peace talks.

In a later statement by Turkey's Prime Ministry stated that the U.S. and Turkey have agreed to strengthen cooperation on Bashiqa Camp located in Northern Iraq and fight against Daesh in Iraq.
Last Update: Jan 24, 2016 2:19 pm