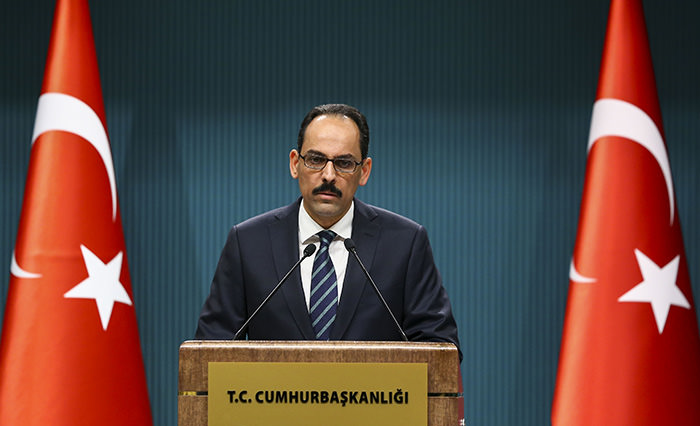 Presidential Spokesperson Ibrahim Kalu0131n (AA Photo)
by daily sabah
Jan 27, 2016 12:00 am
Despite Russia's pressure to include the PKK-affiliated Democratic Union Party (PYD) in the Syria talks beginning in Geneva on Friday, the United Nations is taking into account Turkey and Syria's concerns while claiming the opposition did not send an invitation to PYD leader Salih Muslim. Evaluating Turkey's position, presidential spokesperson ambassador İbrahim Kalın said on Wednesday that Turkey will be represented at the highest level of the negotiations. Reiterating Turkey's opposition to PYD participation in the negotiations, Kalın underlined that Turkey's objections have been shared by other countries as well. "The groups that were supposed to participate in the negotiations were actually set long ago. The Syrian opposition held a meeting in Riyadh and the groups that will participate in the Geneva talks were declared there. This last minute attempt to include it in the talks ... is contrary to the efforts and talks so far," Kalın said.

His remarks came just hours after French Foreign Minister Laurent Fabius said U.N. Special Envoy to Syria Staffan de Mistura had told him that he would not be inviting the PYD to the peace talks in Geneva and that a moderate opposition group would lead the negotiations. "Mr. de Mistura sent invitations ... the PYD group was causing the most problems, and Mr. de Mistura told me he had not sent them an invitation letter," Fabius said on Wednesday.

On Tuesday, the U.N. envoy Staffan de Mistura sent invitations to representatives of the Kurdish group the Syrian Democratic Assembly (SDA), which is believed to be close to the PYD, to participate in the Geneva talks. However, PYD leader Salih Muslim and other representatives did not receive an invitation, to their disappointment. The PYD's representative in France, Khaled Eissa, who had been on the list of possible delegates proposed by Russia, blamed regional and international powers, in particular Turkey, for blocking the Kurds and forecast the talks would fail. "You can't neglect a force that controls an area three times the size of Lebanon," he told Reuters on Wednesday.

Despite the PYD's claim that Turkey is blocking the Kurds from participating in the Geneva talks, Prime Minister Ahmet Davutoğlu made it clear on Tuesday that Turkey would like Syrian Kurds to be represented at the upcoming talks but opposes the presence of the PYD.

"We believe that regarding Syria, there should be a table at which Kurds, Arabs, Turkmens, Sunnis, Alawites and Christians sit altogether. The inclusion of Kurds at the table is a necessity; a table that leaves out Kurds is incomplete. But we are definitely against the YPG [People's Protection Units], which is oppressing Kurds themselves, from sitting at the table," Davutoğlu said.
Last Update: Jan 28, 2016 12:46 pm