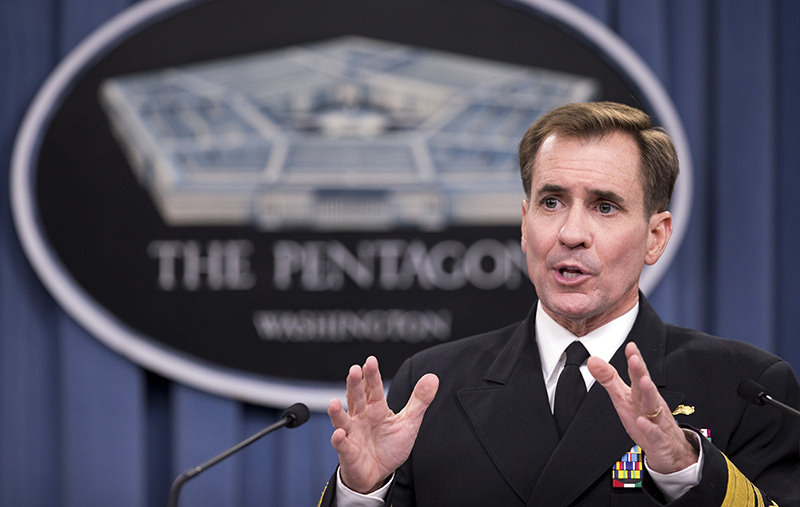 | AP Photo
by Daily Sabah Feb 13, 2016 12:00 am
The U.S. State Department spokesperson John Kirby urged the YPG on Saturday to avoid exploiting the chaotic situation in Syria to obtain control over new areas, amid recent shelling of YPG-held areas by Turkish military in retaliation.

"We are concerned about the situation north of Aleppo and are working to de-escalate tensions on all sides,'' Kirby has said, and added that the U.S. has 'urged Syrian Kurdish and other forces affiliated with the YPG not to take advantage of a confused situation by seizing new territory.'

State Department also confirmed the reports of Turkish shelling of YPG positions and added: ''We continue to encourage all parties to focus on this common threat, which has not subsided, and to work towards a cessation of hostilities, as agreed in Munich."‎

The U.S. wants the YPG to focus on its fight against Daesh and "not involve themselves in other fighting in Syria", State Department spokesman Mark Toner recently said.

Ankara summoned on Tuesday the U.S. Ambassador John Bass to the Turkish Foreign Ministry over the State Department spokesman John Kirby's remarks on 'not considering the PYD, YPG as terrorists'.

"Syrian Kurds are our partners against Daesh," Kirby said, stoking the flames of a rift between Ankara and Washington.

The group was not invited to the talks by the UN's special envoy for Syria who called the meeting. Turkey lists the PYD and its armed wing, the People's Protection Units (YPG), as terror organizations.

The PYD is largely accepted as the Syrian wing of the PKK, which is recognized as a terror organization by the U.S., the E.U and NATO. The group recently opened an office in Moscow adorned with a poster of PKK leader Abdullah Öcalan.