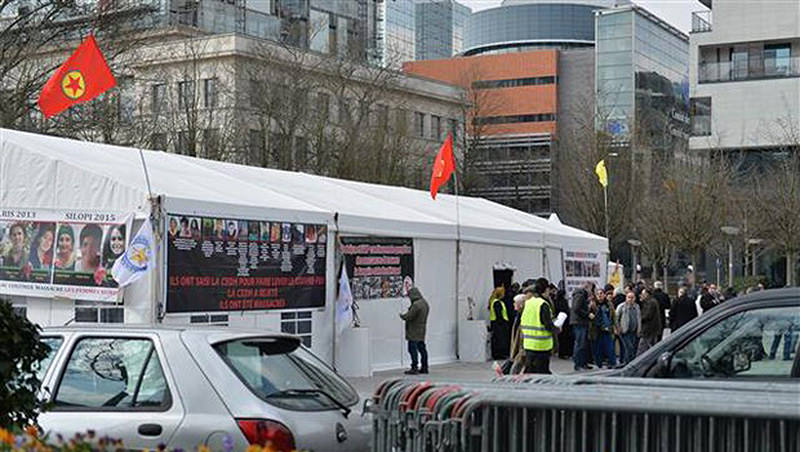 Turkish Ministry of Foreign Affairs has summoned Belgium's Ambassador to Ankara Marc Trentesau over a tent erected by PKK sympathizers in central Brussels while the migration summit between Turkey and the European Union was ongoing.

Ambassador Trentesau was handed over Turkey's official protest on the issue.

Meanwhile, Turkish Foreign Minister Mevlüt Çavuşoğlu called his Belgian counterpart Didier Reynders to notify that Turkey finds that a tent was erected by a terror organization in the center of the EU 'unacceptable', and asked for the immediate removal of it.

According to the information note provided by the Ministry of Foreign Affairs, Çavuşoğlu told Reynders that it is unacceptable the tent evacuated earlier was again filled with PKK banners and posters, underlining that the matter was not concerning the freedom of expression or meeting.
Turkish foreign minister asked his counterpart not to display difference in the fight against terror organizations and underlined Belgian authorities to show the exact determination against PKK's actions as they do to Daesh.

The note also provided information about a phone call held on March 17, prior to the summit in Brussels, between two ministers.

During the phone call, Reynders offered his condolences for the terror attack carried out in Istanbul on Saturday, while Çavuşoğlu expressed his content over the capture of Paris attacks suspect caught in Belgium.