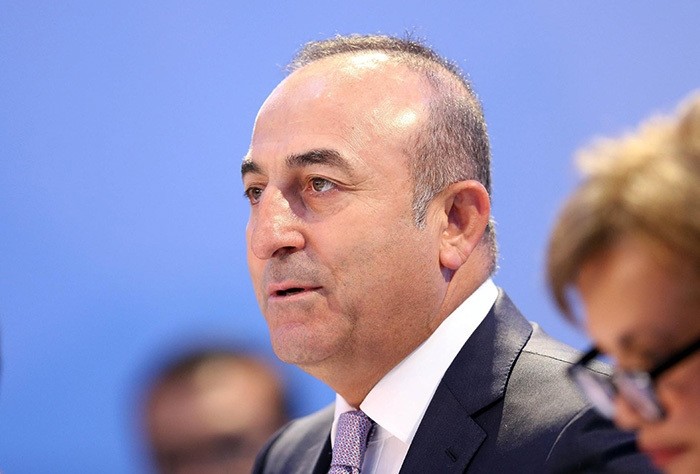 Along with its dual strategies in Syria and in the alliance with Turkey against the PKK, images of U.S. ground troops wearing YPG insignias in the Raqqa operation have led Ankara to say it has lost confidence in its former strategic partner

Turkish officials harshly criticized images of U.S. ground troops wearing uniforms with the insignia of the People's Protection Units (YPG), the militia of the PKK's Syrian affiliate Democratic Union Party (PYD), during an operation against the DAESH stronghold of Raqqa.

Speaking at a press conference following the first session of the U.N.'s Midterm Review Conference of the Istanbul Program of Action for Least-Developed Countries in Antalya on Friday, Foreign Minister Mevlüt Çavuşoğlu said that such images of an ally of Turkey are unacceptable. "Our advice for the U.S. is that they should wear DAESH, al-Nusra, and al-Qaeda insignias when they go to other places in Syria and should wear Boko Haram insignias in Africa," he said, saying it was a double standard and hypocritical.

Recalling remarks from President Barack Obama and Secretary of State John Kerry to President Recep Tayyip Erdoğan on the YPG and PYD, Çavuşoğlu said the U.S. told them the groups are not to be trusted and that the country was on Turkey's side in the fight against terrorism.

"[But now] they are wearing the insignia of a terrorist organization, which is responsible for the last two terrorist attacks in Ankara," he said.

On Wednesday, several photos appeared in media in which U.S. soldiers in support roles for the ground offensive are wearing the insignias of the YPG and Women's Protection Units (YPJ). The incident has drawn reactions on social media in Turkey, with some accusing the U.S. of having a two-faced strategy against Turkey, which is a NATO ally and recognizing the PKK as a terrorist organization.

Ties between Washington and Ankara have been strained over the PYD and the YPG, with the U.S. insisting that it is an effective partner in the fight against DAESH. Ankara continues to reiterate that there cannot be any distinction between good or bad terrorist organizations and asserts that the PYD and the YPG are affiliated with the PKK, a designated terrorist organization by the U.S., EU and NATO.

İncirlik Airbase in Adana, which is used by the U.S.-led anti-DAESH coalition for air offensives against DAESH, has come back into question.

Speaking to Daily Sabah, Bekir Aydoğan, a researcher and writer on the Kurdish issue, said Turkey somehow should prevent activities at the airbase that benefit the PYD, but also continue to allow its use in operations against DAESH without pause and develop proactive moves in the field in addition to responses at the diplomatic level. He said: "Ankara should make a new and applicable move with Gulf countries on the issue of the safe-zone plan and make the Syrian opposition favored rather than the PYD in the fight against DAESH. Moreover, it should be able to sit at the negotiation table with Russia and Iran and not be stuck in the U.S.'s double-faced policy and conducting an air and ground offensive against terror targets in northern Syria."

Citing an anonymous senior official, Al-Jazeera Turk reported that Ankara has lost confidence in Washington due to it breaking its promise since it began using İncirlik Airbase, and this lack of confidence will continue until the U.S. stops supporting the PYD and the YPG.

Amid questions whether such a move is possible, Aydoğan claimed that Washington might even allow the PYD to open a representative office in Washington before the presidential election in November in addition to fortifying the group in Syria.

Professor Ferhat Pirinççi from Uludağ University's Department of International Relations agreed with Ankara's lack of confidence in the U.S. and claimed that this mistrust also exists for other U.S. allies in the region.

"All the factors that caused the rise of DAESH are as plain as day. Those are disregarded by the U.S., and the whole region picks up the bill," he said.