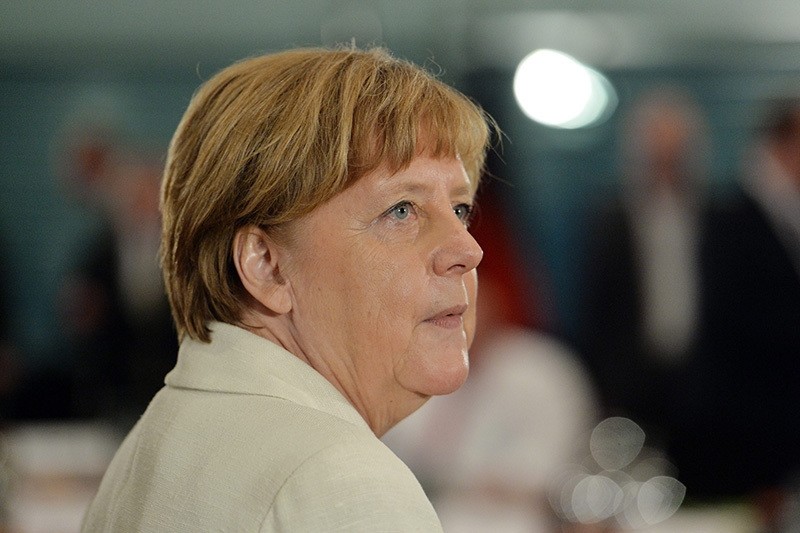 Merkel looks on before the start of a meeting with ministers to discuss about the renewable energy reform (EEG), at the chancellery in Berlin, 31 May 2016. (EPA)
by Daily Sabah with Wires Jun 01, 2016 12:00 am

German Chancellor Angela Merkel agrees with her Christian Democratic Union (CDU) party that the Armenian resolution should pass in parliament but will not attend the session, her spokeswoman said on Wednesday.

"She told me this morning that she sides with her parliamentary group," her spokeswoman, Christiane Wirtz, told journalists when asked if Merkel signaled her approval of the Armenian genocide resolution during a party meeting on Wednesday.

However, the German leader will not be able to attend the vote at the Bundestag due to other official engagements on her schedule, her spokeswoman said.

As German parliament is set to vote on a controversial resolution to recognize the Armenian genocide, Ankara has made its dissatisfaction known and predicts that bilateral relations will worsen as a result.

Ankara does not want to see relations with Berlin damaged, but they will if German parliament votes to recognize the mass deaths of Ottoman Armenians in 1915 as genocide, Prime Minister Binali Yıldırım said Wednesday.

Yıldırım was speaking to reporters at Esenboğa Airport in Ankara ahead of his first official visit to Turkish Cyprus.

"We do not have anything secret or hidden. ... Let the past and history of all countries be investigated. But let historians do this," he said.

Yıldırım said that history was being made an "instrument of politics," calling the German parliament vote "nonsense."

Referring to Germany's large Turkish community, Yıldırım added: "I hope that the German parliament and other decision makers will not turn a deaf ear to the 3.5 million voters. Therefore, we do not want such a resolution to pass," Yıldırım said. "This is null and void for us, but we do not want [it to] pass," he reiterated.

President Recep Tayyip Erdoğan on Tuesday expressed his concern to German Chancellor Angela Merkel about the bill regarding the 1915 events and urged Germany to show common sense, warning bilateral relations could be damaged.

Merkel and Erdoğan also spoke of the importance of the continuation of talks regarding the Readmission Agreement between Turkey and the European Union. Erdoğan also touched on the issue before leaving for a trip to Uganda and Kenya and said that Merkel told him Germany would do whatever it can to address Turkey's concerns. He also said that bilateral relations between Turkey and Germany would be damaged if Germany passes the bill.

Merkel's CDU and junior coalition partner Social Democratic Party (SPD), along with the opposition Greens, prepared the resolution, "Remembrance and commemoration of the genocide of Armenians and other Christian minorities in 1915 and 1916," which uses the contentious word throughout the text.

Armenia's President Serge Sarkissian urged German lawmakers to stand firm. "It would not be fair to not call the genocide of Armenians genocide just because that makes the head of state of another country angry," he told the Bild daily in an interview published Wednesday. "I am sure that Bundestag politicians see it this way too and will not be intimidated," he added. Turkey and Armenia have long been at loggerheads over the so-called World War I-era massacre.

Armenians say up to 1.5 million of their kin were killed between 1915 and 1917 as the Ottoman Empire was falling apart, but modern Turkey rejects the claim, arguing that 300,000-500,000 Armenians and as many Turks died in civil strife when Armenians rose up against their Ottoman rulers.

The vote comes at a particularly awkward time, as Germany and the European Union need Ankara to help stem a migrant influx even as tensions are rising over a string of issues, including human rights.

The issue is also particularly sensitive in Germany, as it has special ties with Ankara not least due to its three-million-strong ethnic Turkish population that settled following a massive "guest worker" program in the 1960s and 1970s.
Last Update: Jun 01, 2016 8:13 pm
RELATED TOPICS