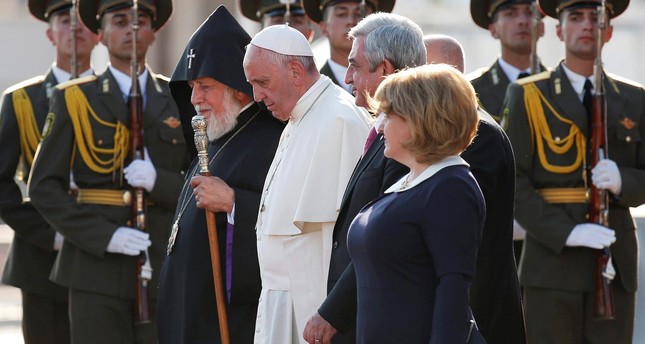 Turkish Foreign Ministry slammed Pope Francis for using the term 'genocide' regarding the deaths of Armenians in 1915 during his recent visit to Armenia, accusing the pontiff for pursuing an unconditional commitment to Armenian perspective of the controversy.

In a statement released on its official website Monday, the ministry said: "Pope Francis' bias on historical events and marginalizing attitude during his visit to Armenia does comply with neither his frequently-emphasized efforts to build peace between different groups nor Vatican's statement released in February which condemns Armenian terror group ASALA."

The ministry said it was disappointing to see that Pope Francis had no contribution to establishing highly-needed peace and stability in Eastern Caucasus in the wake of recent attacks on the Armenian and Azerbaijan border.

Conflict-ridden region Karabakh broke away from Azerbaijan in 1991 with Armenian military support and a peace process has yet to be implemented.

Since the end of war in 1994, Armenia and Azerbaijan have held talks under the supervision of the Organization for Security and Co-operation in Europe's Minsk Group.

The statement added that Pope Francis was instead expected to put efforts in establishing peace and friendship for the coming generations.

Turkey denies the allegations of genocide, but acknowledges that there were casualties on both sides during the events that took place during World War I.

From Turkey's perspective, the deaths of Armenians in eastern Anatolia in 1915 occurred after some Armenian nationalists sided with the invading Russians and revolted against Ottoman forces. A subsequent relocation of Armenians resulted in numerous casualties. Turkey describes the events of 1915 as a tragedy for both sides.

Ankara has repeatedly proposed the creation of a joint commission of historians from Turkey and Armenia, along with international experts, to tackle the issue.

Share on Facebook Share on Twitter
Previous in Diplomacy Deputy Prime Minister Numan Kurtulmuş said on Monday that there was... Next in Diplomacy After a six-year dispute, Turkey and Israel closed a deal to normalize...
DAILY SABAH RECOMMENDS