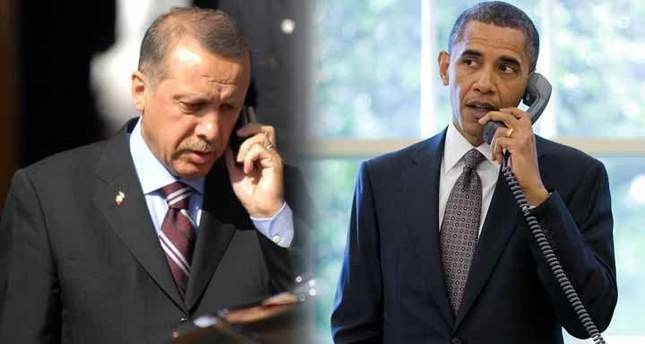 President Recep Tayyip Erdoğan and his U.S. counterpart Barack Obama talked on the phone on Wednesday, during which the American leader said that he "strongly condemned" Tuesday night's terror attack in Istanbul, according to presidential sources.

Obama offered his condolences to the people of Turkey after the attack on Europe's third-busiest airport. Turkey forms part of the U.S.-led coalition against Daesh, which is suspected of perpetrating the attack. The President also commended President Erdoğan and his government for their leadership this week in reaching a deal to normalize relations with Israel and in taking steps to ease tensions with Russia.

"This morning, the president [Obama] was on the phone with President Erdoğan of Turkey. The president placed that phone call to express his deep condolences on behalf of the American people. In the context of that call he will offer any support that the Turks can benefit from as they conduct this investigation and take steps to further strengthen the security," said Earnest.

Earnest did not indicate whether Turkey had officially sought U.S. assistance following the latest attack.

The readout of the phone call was released by the US State Department later on the same day. "The President spoke by phone today with Turkish President Recep Tayyip Erdogan to express his condolences on behalf of the American people and to reaffirm the solidarity of the United States with Turkey following the terrorist attack on Istanbul's Ataturk International Airport on Tuesday," the statement said. "The President noted this attack, like the March attack at Brussels Airport, was an attack on the international community. President Obama offered any and all assistance to support Turkish authorities in their investigation and pledged to continue working with Turkey and all of our partners and allies to fight terrorism."

The airport was shut for several hours after the brutal attack. Planes had begun landing just before dawn, and the first departures took off in the morning hours, as the airport resumed operations.