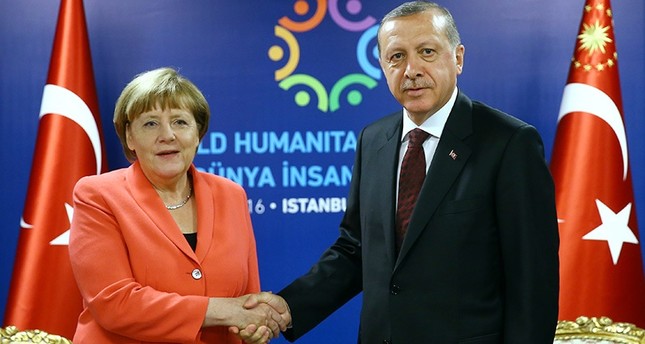 Erdoğan, right, shakes hands with Merkel, prior to their meeting at the World Humanitarian Summit in Istanbul, May 23, 2016. (AP)

President Recep Tayyip Erdoğan and Chancellor Angela Merkel spoke in a telephone conversation on Wednesday evening, during which Merkel said Germany stands by Turkey in the fight against terror, the German government said on Thursday.

Merkel's office says the chancellor condemned Tuesday's attack on the main Istanbul airport and offered her condolences in a Wednesday evening telephone conversation with President Recep Tayyip Erdoğan. A government statement Thursday said the leaders agreed that "the threat from fanatical terrorism must be faced together."

Turkish police have detained 13 people in connection to the deadly airport attack. The three suicide bombers who carried out the attack were of Russian, Uzbek and Kyrgyz nationality, a Turkish official said on Thursday.

Police conducted simultaneous raids at 16 locations in the city. Tuesday's gunfire and suicide bomb attack on Atatürk Airport killed 44 people and wounded more than 230 others.