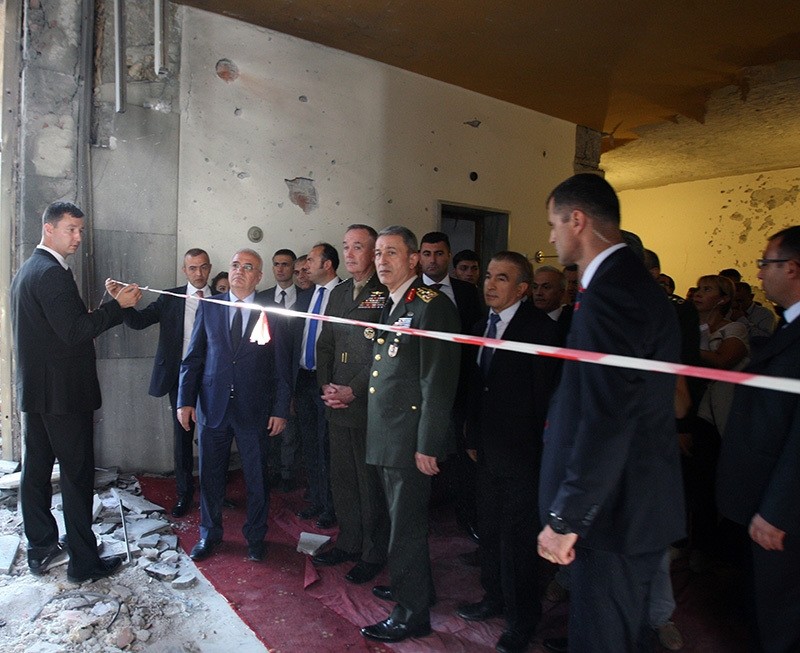 US Chief of Staff Dunford (left in uniform), accompanied by Turkish Chef of Staff Hulusi Akar (right in uniform) inspects the damage at Turkey's Parliament in Ankara on August 1. (IHA Photo)
by Daily Sabah Aug 01, 2016 12:00 am

Following a visit to İncirlik Air Base on Sunday, the U.S. chairman of the Joint Chiefs of Staff, Gen. Joseph Dunford, arrived in Ankara where he held meetings with Turkey's Prime Minister Binali Yıldırım and Chief of the Turkish General Staff General Hulusi Akar, and Gen. Dunford reaffirmed the significance of the partnership for regional security.

As the arrival of Dunford occurred shortly after the bloody attempted coup by the Gülenist Terror Organization (FETÖ), the agenda of the meeting has accordingly focused on the U.S.-based fugitive imam Fethullah Gülen, the alleged leader of FETÖ. Gen. Dunford expressed that America "condemns in the strongest terms the recent coup attempt." Dunford's visit is prior to a visit to the U.S. by Foreign Minister Mevlüt Çavuşoğlu and Justice Minister Bekir Bozdağ, during which Turkish officials will convey evidence of Gülen's involvement in the coup attempt and further urge for the extradition of the U.S.-based leader of the terrorist organization.

A statement released by the Prime Ministry late Monday said that Prime Minister Yıldırım has reiterated the importance of Gülen's extradition to Turkey and urged cooperation while further providing solid evidence to Dunford of the involvement of FETÖ in the attempted coup. The importance of the U.S., which is an ally and a strategic partner, to show its stance against this terrorist coup attempt against our state and nation has been underlined, the statement added.

Prime Minister Yıldırım also underlined that the Turkish Armed Forces are continuing their duties in full capacity with new regulations and appointments, and cooperation with the U.S. and other allies, with the fight against the PKK and DAESH being top priority, continues without disruption. Yıldırım also reminded the U.S. delegation of Turkey's sensitivities in Syria, especially of its PKK/PYD/YPG moves.

The statement noted that that Dunford condemned the coup attempt in strongest terms, adding that he expressed that he paid this visit to show solidarity with the Turkish nation and government. The U.S. gives full support to the democratic system in Turkey and U.S. authorities will continue cooperating with Turkish authorities in all areas along with the military, Dunford said.

Before his meeting with Yıldırım, Dunford, accompanied by Akar, visited the Parliament, which was bombed by putschists during the coup attempt. Dunford was shown the bombed parts of the parliament building and also met with Parliament Speaker İsmail Kahraman.

According to sources speaking to the official Anadolu Agency, Dunford offered his condolences to Turkish officials and reiterated U.S.' support for its ally Turkey. He added that the parliament staying open during the bombing by pro-coup soldiers was a sign of great courage.

During the tour, Dunford told Akar, "Just honored to be inside. It is still standing. Little scratched, a little dented, but it's still here." Dunford also told Akar that the parliament was a symbol of Turkey's greatness.

Investigations by Turkish security forces reveal that a tanker aircraft took off from İncirlik Air Base to refuel the warplanes involved in bombing Ankara during the recent coup attempt, and Turkish officials as well as citizens have argued this shows that the U.S. was not standing firmly against the failed military coup, and increasingly they accuse America of harboring the plot's alleged mastermind. U.S. Gen. Joseph Votel recently stated that the coup officers were "interlocutors" and that he was concerned with the latest purge of officers involved with the coup. Gen. Votel's remarks were strongly criticized not only by the public, but also by President Recep Tayyip Erdoğan and other Turkish government officials.