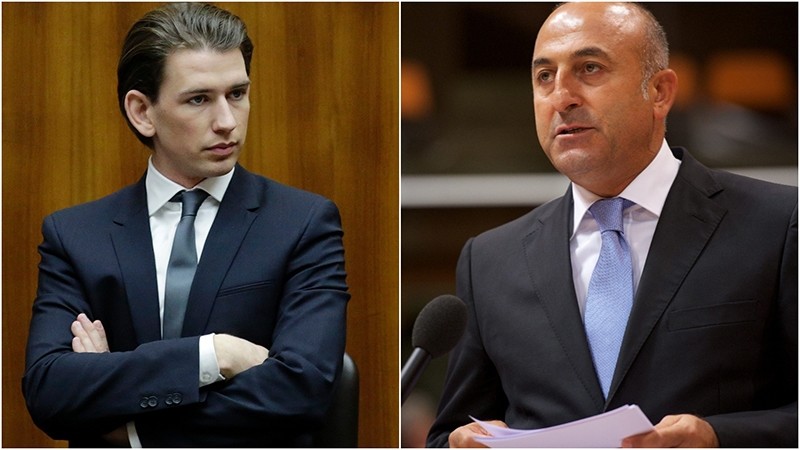 Writing about a recent interview that Çavuşoğlu gave to the German Frankfurter Allgemeine Zeitung newspaper, Austrian Foreign Minister Kurtz tweeted: "I do not accept Çavuşoğlu's ultimatum and turn it back. The EU cannot proceed with dependencies and must protect its borders."

In the interview, Çavuşoğlu had said: "We [Turkey] will have to take a step back from the readmission deal and March 18 agreement if visa-free travel is not granted to Turkish citizens."

He added that Ankara is expecting an exact date from the EU for visa-free travel in the Schengen zone and the EU should not see it as a threat.

@sebastiankurz Das ist nicht Ultimatum Sebastian, it is my opinion. Freedom of expression my friend.

Replying to Kurtz's tweet, Çavuşoğlu later said: "Das ist nicht [This is not] ultimatum Sebastian, it is my opinion. Freedom of expression, my friend."

The Schengen zone is a 26-nation region in Europe where passports are not needed.

The Readmission Agreement between Ankara and the EU was signed in 2013 and went into effect in 2014.

The deal enabled the EU to return illegal migrants who traveled to Greece through Turkey back to Turkey in order to be processed before they are sent back to their country of origin. Iraqi and Syrian citizens, who make up the majority of illegal migrants, are not part of the deal.

The March 18 deal aims to discourage irregular migration over the Aegean Sea by taking stricter measures against human traffickers and improving conditions of the nearly 3 million Syrian refugees in Turkey.

Also under the deal, EU leaders agreed to lift visa requirements for Turkish citizens and accelerate Turkey's EU membership bid if Ankara could meet all of the required criteria to do so.