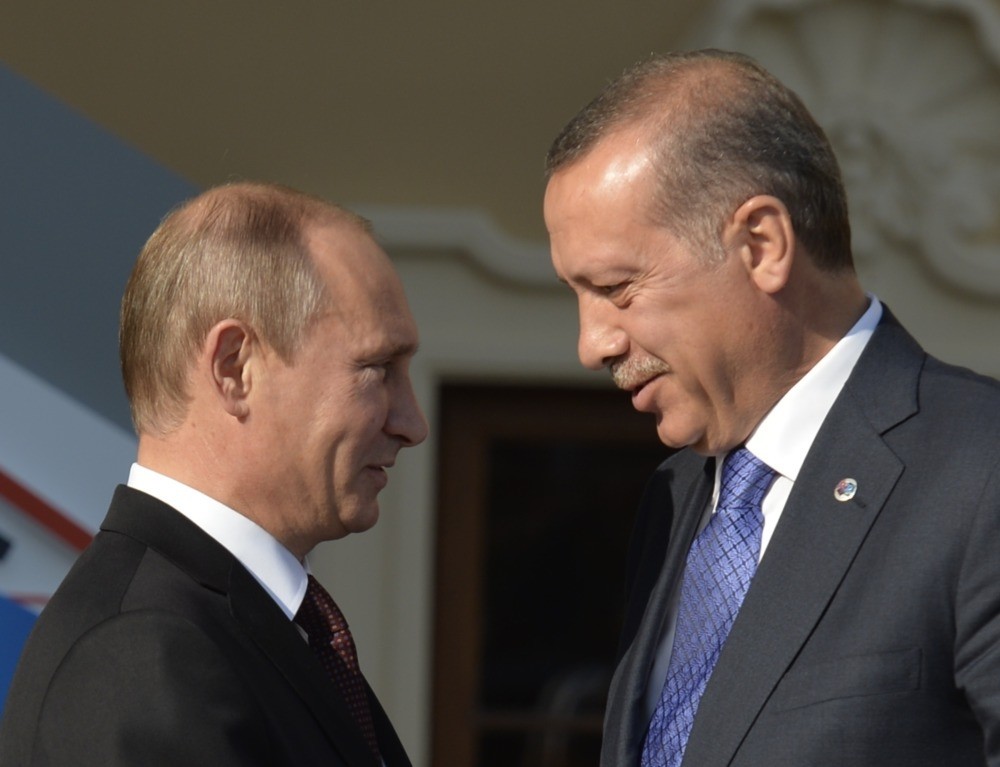 As President Erdoğan is set to hold a crucial bilateral meeting with his Russian President Putin today in St.Petersburg significant regional issues and possible new alliances are expected to be discussed

"Turkey and Russia have so much in common regarding policies. This visit will make a difference in the region in terms of diplomacy, economy and peace," Foreign Affairs Commission member and ruling Justice and Development Party (AK Party) Samsun deputy Hasan Basri Kurt told Daily Sabah. Turkish-Russian relations deteriorated to a great extent after the Kremlin imposed sanctions on Turkish goods, canceled visa-free travel for Turkish nationals and froze substantial economic ties after Turkey shot down a Russian jet over the Syrian border. Putin also banned Russians from going to Turkey for vacation in an attempt to deal a blow to Turkey's tourism sector. Having melted the ice with Erdoğan, Putin took a step back from his strict sanctions. Both leaders stayed in touch following Erdoğan's letter to Putin on Russia Day. Putin's support for Erdoğan following the July 15 coup attempt seems to have further improved relations.

"Putin did not criticize me regarding the number of soldiers and public servants suspended from their duties when he called me to extend his condolences," Erdoğan told French newspaper Le Monde.

Erdoğan's meeting with Putin is also a much-awaited event in Washington. Facing the risk of rising anti-American sentiment in Turkey after a dispute over Gülenist Terror Organization (FETÖ) leader Fetullah Gülen's extradition, the U.S. does not want to lose Turkey to Russia.

"Both countries have entered an era of normalization. We expect concrete and wise steps from the Kremlin," Kurt said.

Erdoğan described the upcoming process as a new page in bilateral relations with his scheduled visit today. "This will be a historic visit, a new beginning. In talks with my friend Vladimir, I believe a new page in our relations will be turned. Our countries have much to do together," he said in an interview with the Russian state Tass news agency on Sunday.

Daily Sabah met with Russian Ambassador to Ankara Andrey Karlov and discussed the upcoming visit. Karlov stressed that Russia always advocates collaboration that will benefit both countries and said that both leaders will take initial steps toward a similar disposition regarding the Syrian civil war. Underlining the importance of increasing cooperation between the two countries in the fight against DAESH, Karlov also said that extensive cooperation means swifter eradication of international terrorism.

Commenting on the failed July 15 coup attempt, Karlov reiterated that Russia supports the elected government in Turkey and is opposed to any unconstitutional action against the government. Regarding Gülen schools, Karlov said that Russia realized the structure of the school system and its intention long

ago and therefore closed down all Gülen schools in 2006.

The involvement of two fighter jet pilots in the FETÖ coup attempt who downed a Russian jet in November, heavily damaging Turkish-Russian relations, became a matter of debate in Turkey's political agenda. Many argued that FETÖ, supported by the U.S., wanted to deteriorate Turkish-Russian ties through the downing of the jet. Putin's foreign policy consultant Alexander Dugin also claimed recently that the FETÖ pilots deliberately shot down the Russian fighter jet. Dugin alleged that the killing was exacted by forces trying to affect relations between the two countries.

On Nov. 24, two Turkish F-16 fighter jets on an aerial patrol intercepted a Russian warplane within rules of engagement when it violated Turkish airspace near the Syrian border. The Russian warplane received 10 warnings about its violation within five minutes before it was shot down. Later on, Erdoğan expressed regret for the incident to Putin on June 27.
RELATED TOPICS