Story of letter that started Turkey's normalization process with Russia 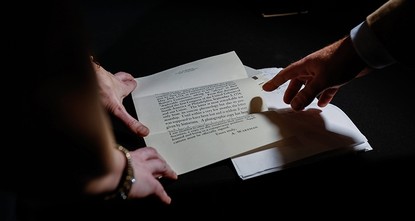 During the digging for the foundation of a new building for the Massachusetts Institute of Technology a time-capsule dated 1957 was found, with many letters inside. (AA Photo)
by Yahya Bostan Aug 09, 2016 12:00 am

The framework of a letter written by President Recep Tayyip Erdoğan to his Russian counterpart Vladimir Putin that paved the way for the normalization process with Russia involved intense efforts of diplomacy and the efforts of many government officials.

The process is being effectively managed under the leadership of presidential spokesman İbrahim Kalın along with Chief of General Staff Gen. Hulusi Akar.

While President Erdoğan instructed Kalın to deliver the letter to Putin by hand, who was in Tashkent at the time, the Turkish jet carrying the official had difficulty landing in Uzbek territory due to a delay in permission. With the brokering of Kazakhstan President Nursultan Nazarbayev, the required permission was granted and the Turkish jet carrying Kalın and Cavit Çağlar, a businessman directly involved in the normalization process, landed.

Then, Kalın and Yuri Ushakov, Putin's chief adviser, held a meeting to discuss the details of the letter in the early hours of June 24. Later on, the letter was delivered to Putin and the Russian leader accepted it.