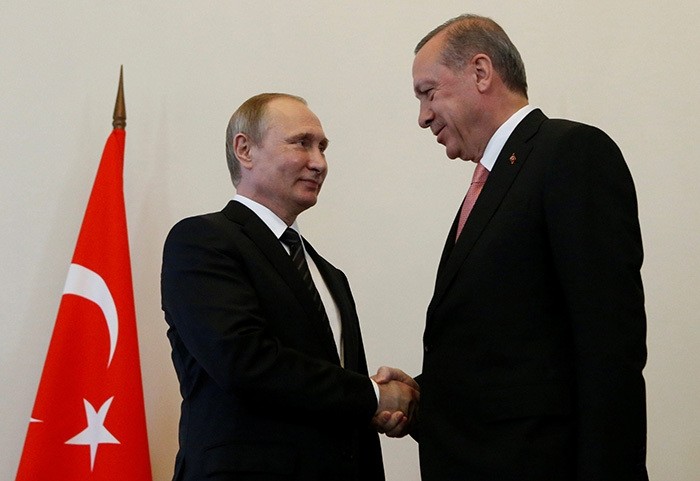 President Recep Tayyip Erdoğan's summit with Russian President Vladimir Putin Russia on Tuesday means something beyond new economic agreements and the acceleration of projects. Both leaders stressed their willingness to forge a new alliance in the region and find common ground on several issues.

After relations declined following an incident when a Russian jet was shot down by a Turkish pilot for violating Turkish airspace, Ankara and the Kremlin are set to pick up where they left off.

"Turkey and Russia have a chance to improve relations over what they were before Nov. 24," Yaşar Hacısalihoğlu, Yeni Yüzyıl University's vice dean and academic in the Department of International Relations and a columnist for the Akşam daily, told Daily Sabah.

The two leaders aim to improve communications. Erdoğan and Putin exchanged ultimatums and threats following the downing of the Russian jet.

The future of Syria and Bashar Assad seems to be the greatest obstacle in the way of a perfect relationship between Erdoğan and Putin. Whether Putin will agree to a regime without Assad remains an open question.

Another problem for Turkey is with Russian support for the Syrian offshoot of the PKK terrorist organization, the Democratic Union Party (PYD).

"What will shape the future of relations is Syria. Both countries have the chance to form a joint agenda," Hacısalihoğlu contended, adding that Russia's compromise regarding the PYD will eventually make the U.S. give up support.

Turkish relations with the U.S. have gone south since February, following a statement from U.S. State Department spokesman John Kirby that the U.S. does not consider the PYD's armed faction, the People's Protection Units (YPG), to be a terrorist organization.

Hacısalihoğlu claimed that Turkey will get Russia to convince Assad to leave his post. "Turkey will agree to the continuation of the regime once Assad is gone. There will be elections as well."

There is the possibility that the two countries will abandon the table if they cannot agree on policies regarding Syria. This possibility makes some wonder whether the two leaders might once again burn bridges.

"Ankara and the Kremlin will continue the collaboration on other issues such as economy, energy, tourism etc., which was the situation before Nov. 24. They have the chance to go beyond that."