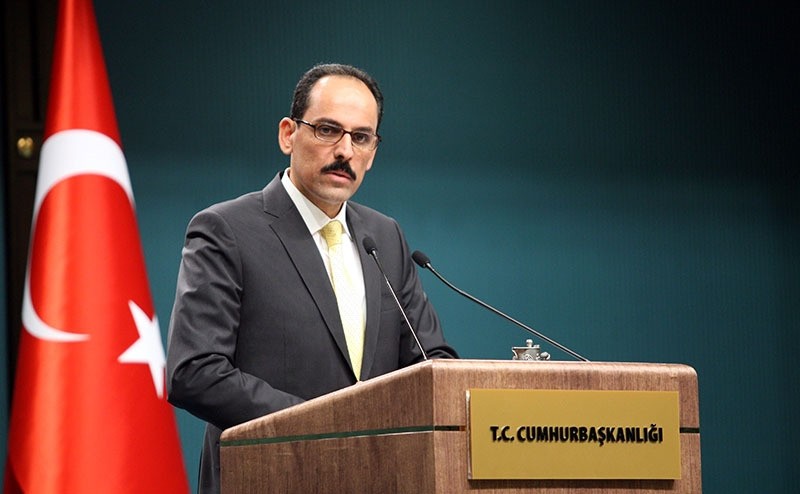 Turkey and Russia have formed new committees to discuss the Syrian crisis, which will meet for the first time in Moscow on Thursday, Turkey's presidential spokesman said Wednesday.

In remarks made to the Turkish A Haber TV, Ibrahim Kalın said orders to set up new committees to tackle the Syrian crisis were issued following the meeting between President Recep Tayyip Erdoğan and his Russian counterpart Vladimir Putin in St. Petersburg.

"The presidents [of Russia and Turkey] gave an order yesterday [Tuesday] to set up again a trilateral mechanism, which would comprise of committees with representatives of intelligence, military and diplomatic representatives from each side.

"I think the committee will go to Moscow today [Wednesday] night. The first meeting will be tomorrow [Thursday]," Kalın said.

The spokesman said Turkey and Russia have opened a new chapter following the meeting between Erdoğan and Putin in St. Petersburg.

Kalin said the shooting down of a Russian jet for violating Turkish airspace near the Turkey-Syria border last November had upset both countries.

"We have opened a new chapter. This unwelcome incident had upset us. It was said [on Tuesday that both countries would remain] in close cooperation for avoiding such incidents.

He also said the Russian Chief of General Staff Valery Gerasimov had also attended the meeting between Erdoğan and Putin. "The chief of general staffs of our two countries are in very close cooperation."

Kalın said that regional issues were discussed during Erdoğan and Putin's meeting, Syria being foremost among them. "Both parties agreed to halt armed conflicts, provide humanitarian aid to the city of Aleppo, preserve Syria's integrity and political transformation. Still, we have different views on [Bashar] Assad and how to realize these goals. All of this will be discussed."

When asked whether the PKK's Syrian affiliate PYD's office in Moscow was discussed in the meeting, Kalın affirmed that Erdoğan talked with Putin about it and Putin said that they know Ankara's sensitivity to it.

About the lingering Nagorno-Karabakh conflict between Azerbaijan and Armenia, Kalın said that a trilateral mechanism between Azerbaijan, Turkey and Russia was established, which he deemed an essential step in resolving the issue. "There are certain developments in this issue, which are for the better," Kalın said, adding: "If Armenia withdraws its forces from the invaded territories, we believe that the issue could be resolved swiftly. This could be beneficial for relations between Armenia, Turkey and Azerbaijan, as it would relieve tensions between the countries."

Erdoğan and Putin met for the first time after the Turkish Air Force shot down a Russian jet last November, which soured relations between the two countries until the issue was largely resolved on June 29, initiated by a letter and subsequent telephone calls between the countries' leaders.

The two Turkish pilots who downed the Russian jet were arrested July 19 for alleged links to the coup attempt in Turkey.

Turkey-Russia relations were severed last year after Turkey shot down a Russian military jet as it violated Turkish airspace.

Relations between the two countries had remained soured until the issue seemed largely resolved June 29 through a letter and subsequent telephone calls between the countries' leaders.

Putin gave his support to Turkey over the July 15 coup attempt and said he stood by the elected government, offering his condolences to the victims of the attempt.

On July 22, Russia also lifted restrictions on flights to Turkey, which had been implemented temporarily following the coup attempt, after Turkish officials assured their Russian counterparts that additional security measures were being taken.