Justice minister: US not returning Gülen means it has chosen FETÖ over Turkey 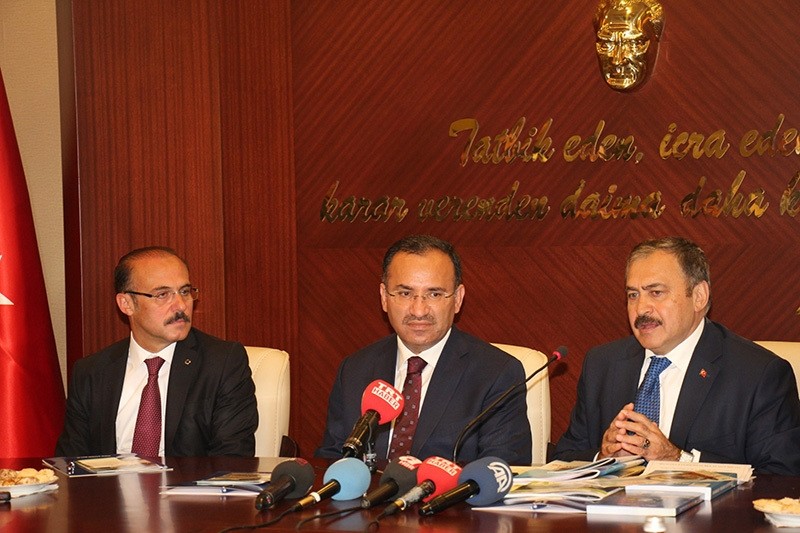 Justice Minister Bekir Bozdağ said on Friday that four experts from the U.S. Justice Department will be visiting Turkey on Aug. 22 concerning Ankara's request to extradite Fethullah Gülen due to the coup attempt he is accused of masterminding on July 15. Bozdağ once more said that if the U.S. does not extradite Gülen to Turkey it would mean the U.S. has given up on its relations with Turkey for Gülen.

Evaluating a recent statement from the U.S. concerning Ankara's worries over Gülen's extradition, Bozdağ said: "This is not a choice, but only a judicial process," once more emphasizing the importance of returning Gülen for both countries. Claiming that Gülen's extradition is being followed by the entire world, he said: "We hope that by the force of our friendship with the U.S., Gülen will be extradited to Turkey as soon as possible."

Declaring that the U.S. has to extradite Gülen as his crime is clear, Bozdağ said he does not think the U.S. administration doubts that Gülen is the perpetrator behind the coup attempt, as "the whole world knows that he is." "If the decision is in favor of returning Gülen, then it would once more confirm the strength and the existing benefits of Turkey-U.S. relations. If it does not, then it would mean that the U.S. is willing to sacrifice Turkey over a terrorist," Bozdağ added.

In addition to Bozdağ's statements, Foreign Minister Mevlüt Çavuşoğlu said on Thursday that Turkey is seeing signs of cooperation from the U.S. over the extradition of the Gülen Movement leader, saying: "A delegation from the U.S. Department of Justice is coming to Turkey soon." Çavuşoğlu was speaking on a live interview, and added that Turkey will then renew the extradition request. On Wednesday at the closure of the "democracy watch" rallies, President Recep Tayyip Erdoğan said: "Sooner or later the U.S will make a choice. Either coup-plotting terrorist FETÖ [Gülenist Terror Group] or democratic country Turkey." FETÖ is the term the Turkish government uses for the movement headed by Gülen.

The fugitive retired imam has led a long-running campaign to overthrow the state through the infiltration of Turkish institutions, particularly the military, police and judiciary, forming what the government calls the "parallel structure." Ankara said the foiled coup, which left 240 people dead and nearly 2,200 injured, was organized by followers of Gülen, who has lived in self-imposed exile Pennsylvania since 1999.