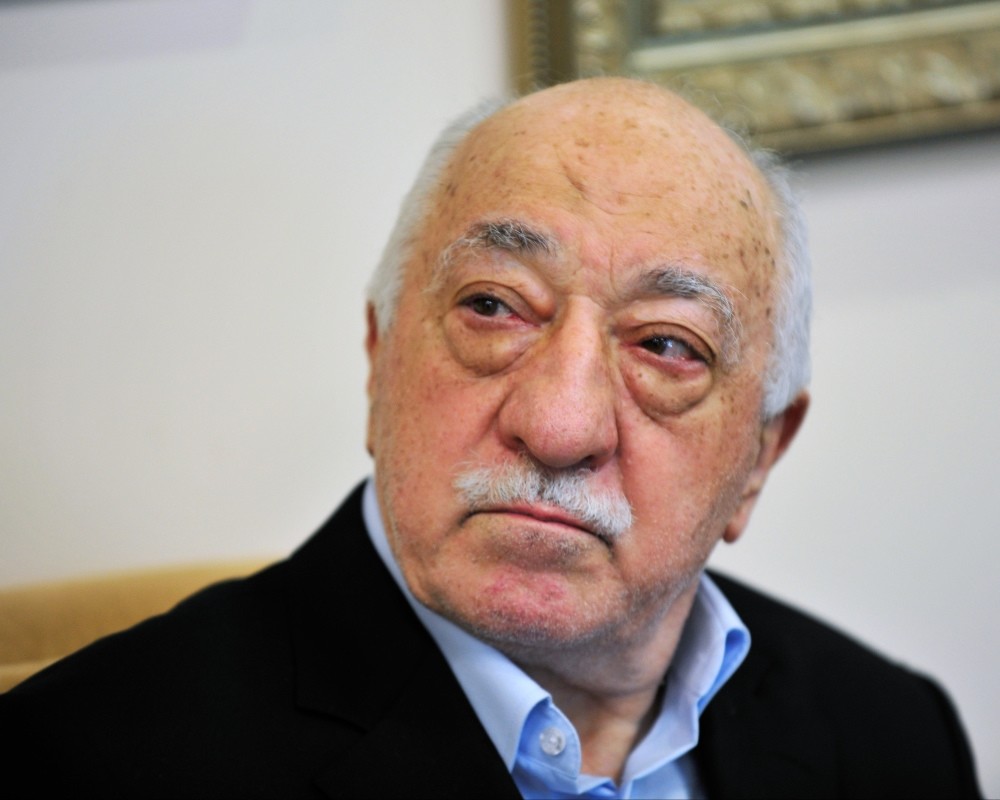 Amid the already high tensions between Washington and Ankara over the U.S.'s partnership with the Syrian PKK affiliate PYD and its armed YPG in Syria, Washington's reluctance to extradite FETÖ leader Gülen has further strained Turkish-U.S. relations

The American insistence on not acknowledging the social sensitivities in Turkey's political and social fabric, in combination with an attitude that looks down upon Turkey's political leadership, have further escalated tensions between Ankara and Washington. Meanwhile, Washington, as well as American analyst and media outlets, ignored President Recep Tayyip Erdoğan's rhetoric and ignoring the nation's united pro-democracy stance against the bloody coup, has given rise to anti-Americanism in Turkey.

Angered by the attitude of its strategic ally, Ankara gave an ultimatum to Washington, with President Erdoğan saying on Aug. 10, "Sooner or later the U.S will make a choice. Either Turkey or FETÖ."

Washington has commented on President Erdoğan's demand on the extradition of Gülen, saying it is a judicial process, which might take months or even years, a position that Ankara believes has been politicized as a result of the strained relations.

Ufuk Ulutaş, foreign policy coordinator at the Foundation for Political, Economic and Social Research (SETA), supports the position, saying that the judicial process of Gülen's extradition has been politicized.

Ulutaş says Ankara's recent rhetoric on Washington has not been welcomed as a result of the issue turning political. "On the one hand, Gülen's extradition is shown as a 'judicial process,' and on the other hand, in a way, the U.S. says that if Turkey wants the extradition of Gülen from a 'such a great country like the U.S.', then it should not glower at the U.S. This is hypocritical of the Washington administration that calls the process a 'judicial one' while actually politicizing it."

At a time where there is political reconciliation between Turkey's political parties and a strong united position toward all terror groups, including FETÖ, the PKK, PYD, DAESH, and other threats to Turkey's democracy, it seems rather beneficial for the U.S. to stand by the people's free will in Turkey and support Turkish democracy.

Commenting on the upcoming visits by U.S. Secretary of State John Kerry and U.S. Vice President Joe Biden to Ankara and the visit's effects on the future of Turkish-U.S. relations, Ulutaş said: "The U.S. will try to tone down the crisis. The key aspect of these meetings will be how to switch the U.S. from Gülen's side to Turkey's. Turkey will not back down from its position on Gülen's extradition. If the U.S. takes positive steps and the necessary measures against FETÖ, relations will get better."

In a recent interview with the Hürriyet daily, James Jeffrey, who was the U.S. ambassador to Ankara between 2008 and 2010, said: "We are still waiting – the entire public world – [for] specific evidence but most indications, not just the Turkish government's statements, point to the Gülenist Movement [FETÖ]."

Acknowledging that members of the group infiltrated state institutions, Jeffrey said: "The Gülenist Movement [FETÖ] has some infiltration at least in the military that I am aware of. They of course had extreme infiltration into the police and judiciary earlier. I had seen that when I was in Turkey previously, particularly in the Sledgehammer case, [the National Intelligence Organization head] Hakan Fidan case [and the] corruption cases in 2013. It is very clear that a significant segment of the bureaucracy in Turkey was infiltrated and had their allegiance to a movement, not a state. That of course is absolutely unacceptable and extremely dangerous. And it is highly likely that it led to the [attempted] coup." However, Jeffrey continued, "What we don't know is the absolute proof of this."

Meanwhile, Jeffrey commented on the anti-Erdoğan stance in Washington, saying that the president is not very well liked as he brings forward the conflicts between the two states. Moreover, what is read between lines is that President Erdoğan, as an ally to the United States, does not follow the orders demanded by Washington. Jeffrey says that President Erdoğan "does not play the game by its rules," and adds: "Look at [Abdel-Fattah] el-Sissi. Despite his harsh feel, he plays the game." Here, Jeffrey flinches from comparing Turkey's first democratically elected president, who received 52 percent of the votes in a free and fair election, to an ex-army general who overthrew Egypt's first democratically elected president in a bloody coup d'etat. Such a reading of Turkey's political leadership is perhaps a big factor in the strained relations between Ankara and Washington.

Specifically talking about Jeffrey's comments on "all signs lead to Gülen being behind the coup attempt," while speaking to Daily Sabah, Head of Department of Political Science and International Relations at Bahçeşehir University Gülnur Aybet said: "The former U.S. Ambassador to Ankara James Jeffrey recently said in an interview that all indications about who was behind the coup attempt point to Gülen. This is significant coming from a senior figure. Although there is a mutual extradition agreement between the U.S. and Turkey, and although Turkey has requested the handover of Gülen accompanied with lengthy evidence taken from on an ongoing legal investigation and other evidence that came to light after the coup attempt, there is a general atmosphere of nonchalance on the part of the U.S. with regards to the matter. At least that is how it is seen from Turkey. The confirmation of a senior figure like Ambassador Jeffrey that Gülen was indeed behind this coup attempt with the intention of wrecking Turkey's democratic system in order to bring a secret organization into power can be very important in activating some urgency and seriousness into the process by U.S. officials."

"In terms of public diplomacy the U.S. is not doing very well in directly addressing the frustration of the Turkish public. This is leading to an increasing tide of anti-Americanism in this country, which is at the end of the day, not a positive thing for U.S. interests. If anything, statements coming from the U.S. whether official, or from analyst circles or the media, since July 15, have exacerbated the sentiment of anti-Americanism in Turkey. U.S. analysts and officials are wrong to believe that this tide is due to the rhetoric of President Erdoğan. The president is only addressing what is widely felt in the Turkish public. This is something that U.S. decision makers need to come to terms with," Aybet said.

Mustafa Kibaroğlu, a professor of political science and chairman of the Department of Political Science and International Relations at MEF University, says U.S. officials have failed to read Turkey's social dynamics and social fabric, which leads to strained relations between the two allies. Kibaroğlu added that after the July 15 coup attempt, there has been a failure in the U.S.'s part to show empathy toward what Turkey has gone through, lacking political sensitivity towards an ally that has gone through a bloody coup attempt.

"Washington officials, in many cases, get to know Turkey's politicians and their character through reports from diplomats in Ankara. However, such reports are prepared without counting the social fabric of Turkey and understanding the country's social dynamics. Also, they turn out to be reports prepared from an 'external' position, rather than an 'internally made' thorough analysis, leading to Washington's misreading of Turkey's leadership."

Kibaroğlu added that Washington must leave biases toward Ankara behind and establish a rapprochement without prejudice toward Turkey, particularly through showing support after the coup attempt. Commenting on the future of Turkish-U.S. relations, he said: "It is hard to know what will happen if Donald Trump wins the presidential elections. Individual attitudes will play a big role. However, Washington must be informed by accurate analysis from Ankara, leaving behind an imperious attitude."

Galip Dalay, director of the Istanbul-based al-Sharq Forum, stressed that the extradition of Gülen is a major issue between Ankara and the U.S. administration, among other issues.

"They [President Erdoğan being] an authoritarian discourse in the U.S. is a result of political conflicts between the two states. The Gülen issue is 'the issue' causing the recent political crisis, among other disagreements," Dalay said.

Commenting on U.S. reluctance to extradite Gülen, Dalay added that it would be a "lose-lose situation for relations between the two states." "The Gülen issue is a result of disagreements on visions and strategy. In a way it, it is a result of U.S. desire to discipline Turkey, and Turkey resisting it. Such behavior is a lose-lose situation for both countries." Dalay added that the U.S. not extraditing Gülen "would be a manageable crisis between the two states, but it would further damage trust."

Yaşar Hacısalihoğlu, Yeni Yüzyıl University's vice dean and academic in the Department of International Relations, said the U.S.'s decision on whether to extradite Gülen would expose Washington's stance on democracy.

"When the scale of democracy is set up, the U.S. will decide. Either it will put its weight on the side of an anti-democratic bloody coup attempt against the people's will and a person behind such an act that does not count as democracy, or it will side with democracy and the people's free-will and their democratically elected government," he said. "If they return Gülen to Turkey, they will. This would be a test for the U.S. If not, it would be a reflection of the anti-Erdoğan stance. They will either lose Turkey's democracy or develop their relationship as an ally." Hacısalihoğlu also said the U.S. must recognize Ankara's right to establish its own agenda, saying: "Turkey is no longer a simple NATO ally, like it was during the Cold War. Neither Turkey nor Mr. Erdoğan is in that position anymore. This must be acknowledged. If Turkey's rightful demands are met, Mr. Erdoğan will not be a harsh leader."

Turkey continues to provide evidence to prove that Gülen and his cult-like network is behind the bloody coup attempt, which aimed at overthrowing the democratically elected government, in addition to the infiltration into state institutions, creating what is commonly known as a "parallel structure."

On the extradition of Gülen, Turkey has submitted formal requests more than once, and boxes of evidence, to the U.S. Department of Justice, in addition to the already known motives of the group against Turkey's democratically elected government. In fact, many leading figures of the coup attempt have also openly signaled to the U.S.-based figure as being the man behind the coup in their testimonies. However, America remains reluctant.

At a time where there is political reconciliation between Turkey's political parties and a strong united position toward all terror groups, including FETÖ, the PKK, PYD, DAESH, and other threats to Turkey's democracy, it seems rather beneficial for the U.S. to stand by the people's free will in Turkey and support Turkish democracy. In fact, this is perhaps one of the golden opportunities for the U.S. to re-establish and repair its image in the public eye, which has been damaged for a long period now, by siding with Turkey's people and standing against a bloody coup attempt, where 240 people lost their lives and more than 2,200 others were injured.