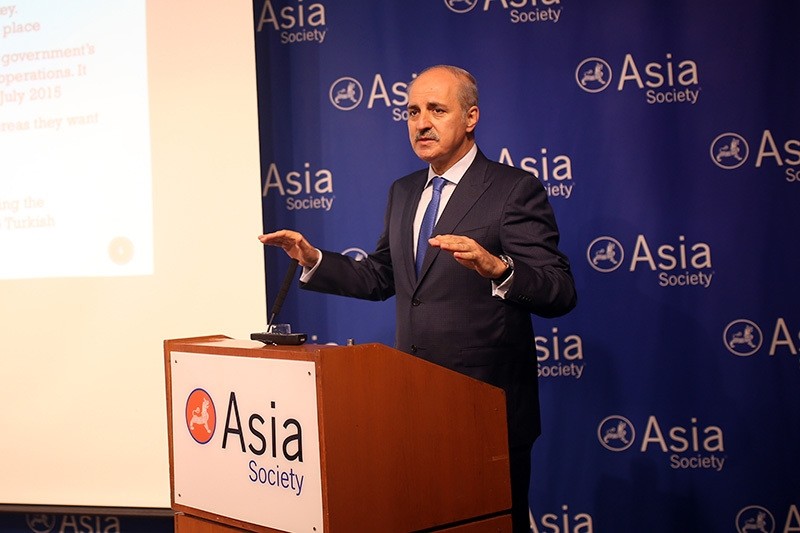 Deputy Prime Minister Numan Kurtulmuş on Tuesday rejected allegations his country was changing its foreign policy axis in the wake of a recent coup attempt in Turkey.

"We sometimes face the question: 'Is Turkey changing axis'? That is not a logical question," Kurtulmuş told a conference at the Asia Society in New York City.

"Turkey never changes its axis. Turkey has only one axis, and it is its own," he said.

Relations between Ankara and Moscow thawed last month following a bitter hiatus since last November, and it coincided with the immediate aftermath of a July 15 bloody coup attempt that killed 240 people, injured nearly 2,200 and witnessed the bombing of the Turkish parliament for the first time modern history.

The foiling of the attempted putsch was as an "unprecedented victory in Turkish history", according to Kurtulmuş, as Turks came together to defy tanks, bombing and intense shelling that claimed innocent lives.

The deputy prime minister said Ankara expects Washington to extradite the coup mastermind, Fetullah Gülen, who has lived in Pennsylvania in self-imposed exile since 1999.

It is "not a question of time but a question of intention", Kurtulmuş said of the extradition process, adding that Ankara was "much more optimistic now" about its outcome.

FETÖ is a "threat also to the United States", Kurtulmuş said during an interview with Turkish state broadcaster TRT after the conference.The group operates nearly 150 charter schools in the U.S., one third of which are concentrated in the state of Texas where they face a corruption investigation.

FETO also has ostensibly educational and cultural institutions in nearly 170 countries around the world where they "are trying to influence the governing agencies, and if possible, take control of them".

Kurtulmuş said during his address that Turkey is an "island of stability" in a region plagued by violence and terrorism and an "inspiration for Muslims countries", while explaining that the country has been the target of intense terrorist attacks since July 2015 from three fronts: separatist PKK terrorists, Daesh and Marxist leftist terror groups.

Ankara launched Operation Euphrates Shield last month with the goal of clearing its southern border with Syria from terrorist organizations, targeting Daesh and YPG/PKK positions near border towns. Kurtulmuş described the YPG as a "branch of PKK" in Syria that provides the group with human resources, intelligence, weaponry smuggled inside Turkey.The operation has resulted in tangible gains against both groups, with several villages and towns liberated and a 98-kilometer (60-mile) Daesh-held stretch border territory reduced to 25 kilometers (15 miles)."We do not intend to stay long in Syria," Kurtulmuş said, adding that Turkey wished a democratic future free of violence for its Syrian neighbor.

The deputy prime minister said Turkey also demands that YPG forces move east of the Euphrates river in accordance with commitments by the U.S. and anti-Daesh forces on the ground.Kurtulmus said just as Washington would have to make a decision between the Turkish nation of 79 million and Gülen-led FETÖ, it would also have to decide between its "strategic NATO ally" and "friend" Turkey and a "small terror group that benefits the U.S. for now and may or may not be there in the future".

Deputy Prime Minister Kurtulmuş added that Turkish armed forces would continue their operation in Syria "until no terrorist group on our border remain capable of harming us".Syria has suffered unspeakable losses over the last five years since the Assad regime violently suppressed a peaceful protest against his rule, unleashing a downward spiral of violence that killed hundreds of thousands of victims and displaced millions.