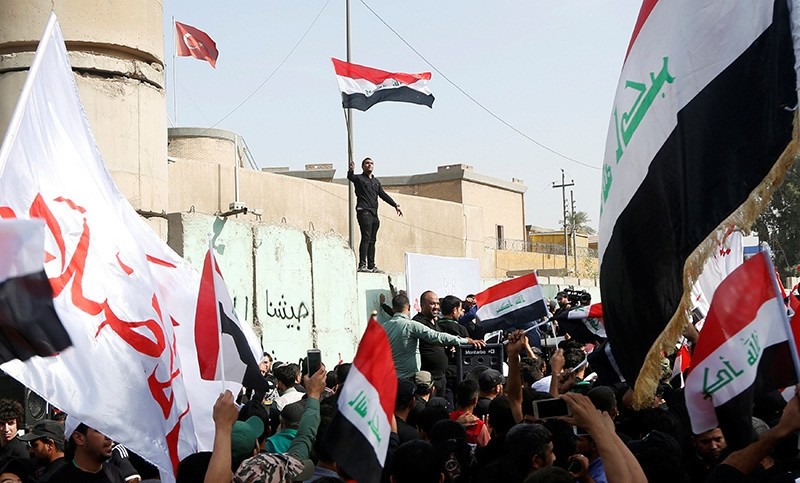 Supporters of Iraqi Shiite cleric Muqtada al-Sadr shout slogans during an anti-Turkey protest in front of the Turkish embassy in Baghdad, Iraq October 18, 2016. (Reuters Photo)
by Daily Sabah with AA Oct 18, 2016 12:00 am

Prominent Iraqi Shiite cleric Muqtada al-Sadr called on his followers to stage a protest in front of the Turkish embassy in Baghdad on Tuesday.

In a televised video message, al-Sadr said the scheduled protest in front of Iraq's federal court building has been moved in front of the Turkish embassy due to the ongoing diplomatic spat about Mosul between Iraq and Turkey.

The cleric asked his followers to protest Turkey's military deployment in Bashiqa camp near Mosul, which serves to train Iraqi Sunni and Kurdish forces in their fight against Daesh terrorists.

The terrorist group considers Shiite Muslims as its primary enemy and frequently conducts bombings in mosques and commercial areas in urban settlements occupied by a Shiite population.

Although al-Sadr has avoided any public posts since the American invasion in 2003 – which he opposed and fought on occasion – he remains one of the most powerful and influential people in Iraq.

In May, al-Sadr's followers demanding reforms occupied the Green Zone, which includes Iraq's key government institutions, for days, while storming the parliament building.

The federal court ruled last week that the removal of the vice presidency post, which was abolished by the Iraqi parliament in August 2015 upon the reform plan of the Iraqi Prime Minister Haidar al-Abadi's cabinet, is against the constitution.

The final holders of the vice presidency post prior to its abolition were former prime ministers Nouri al-Maliki and Ayad Allawi of Shiite background, and former parliament speaker Osama al-Nujaifi, who has a Sunni background. Both al-Maliki and al-Nujaifi stated they will take the abolition decision to court.