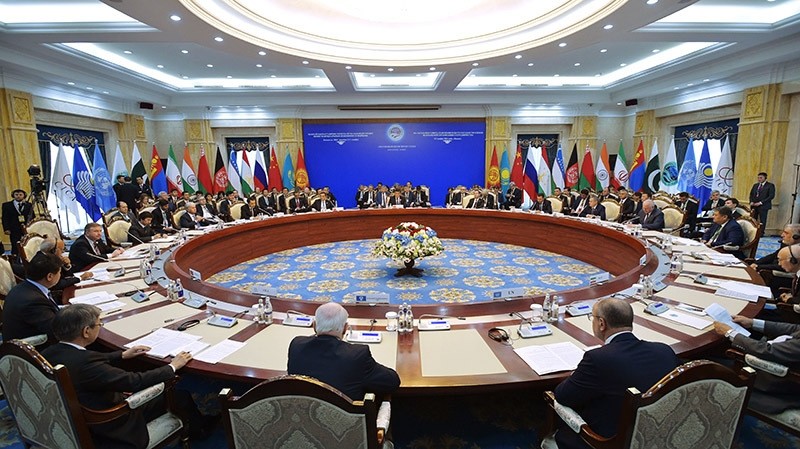 Heads of government from countries of the Shanghai Cooperation Organisation gather for a summit in 2016. (AP Photo)
by Mustafa Kırıkçıoğlu Nov 21, 2016 12:00 am

After President Erdoğan suggested the SCO as an alternative to the EU, which has kept Ankara waiting on its accession for more than 50 years, officials from Russia and China have expressed optimism over Turkey’s SCO membership

Officials from Russia and China gave a green light to Ankara after President Recep Tayyip Erdoğan on Sunday pointed to the Shanghai Cooperation Organization (SCO) as Turkey's alternative to the EU.

Chinese Foreign Ministry spokesman Geng Shuang said that Turkey is already a dialogue partner and has been in close cooperation with the bloc for a long time, which China appreciates, "We are willing, together with other members of the Shanghai Cooperation Organization and in accordance with the rules of its legal documents, to seriously study it on the basis of consensus consultation," he said.

On the Russian side, a committee member of Russia's Federation Council Committee on Defense and Security Alexei Pushkov took to Twitter on Sunday, tweeting about Erdoğan's words saying, "Turkey's membership in the Shanghai Cooperation Organization would be a rational step for Erdoğan. The SCO is different and not a substitute for the EU but members of the SCO are completely sovereign, unlike the EU."

Speaking on the issue, Gen. Leonid Ivashov, one of the founders of the SCO, said yesterday to reporters that Turkey's effort for inclusion to the organization would be the right move.

"President Erdoğan's statement regarding the SCO is the right decision. The SCO has a bright future on economy, transportation and security matters. That's why Turkey's accession is very important," he said.

However, Ivashov added that the country should start its departure process from NATO as they do not foresee the accession of a NATO-member to the SCO.

President Recep Tayyip Erdoğan spoke to journalists Saturday on the presidential plane where he said it is time for Turkey to openly consider alternatives to the EU, suggesting that the SCO is a perfectly plausible substitute.

He pointed to Turkey's first application for membership of what was then known as the European Economic Community (EEC) in 1963, saying, "The EU has been procrastinating for 53 years. Can anyone accept such behavior? If you are not going to end talks, why open them in the first place?"

Meanwhile, Turkey's Deputy Prime Minister Numan Kurtulmuş said yesterday in a press conference that Turkey is one of the exceptional countries that can simultaneously establish relations with every part of the world.

"As you know we are already an observer of the Shanghai Cooperation Organization (SCO). We will see developments in time," he said.

Speaking to Daily Sabah on the issue, Eşref Yalınkılıçlı, an Eurasian analyst and journalist for the TRT World news channel said that Turkey should join the SCO to avert non-conventional security threats, adding that the SCO cannot be compared with the EU since it prioritizes security cooperation rather than the economy.

"The main purpose of the SCO is cooperation against terrorism, separatism and radicalist threats that have been labeled the 'three sources of evil' by member states. Since almost all of Turkey's security threats come from its Asian borders, the accession to the SCO is vital for the country, in order to prevent threats before they come to our soil by cooperating with countries in the region," he said.

Yalınkılıçlı underscored that it would be wrong to compare the SCO to the EU in terms of Turkish public opinion, adding that Turkey has great geopolitical significance due to its strategic location as a crossroad between Asia, Europe and the Middle East.

"Turkey should keep its connections with all of these organizations, including NATO and the EU, because doing so is beneficial from multiple perspectives," he said.

President Erdoğan put Turkey's willingness to join the SCO into words for the first time during his meeting with Russian President Vladimir Putin in St. Petersburg in November 2013.

"Get us out of this suffering [EU]. We are willing to finalize a Free Trade Agreement with Eurasian countries. I talked about Shanghai Cooperation Organization with [Putin] before. We care about it," he said.

Mongolia, India, Iran, Pakistan and Afghanistan are observers of the SCO, while Belarus, like Turkey, is a dialogue partner.