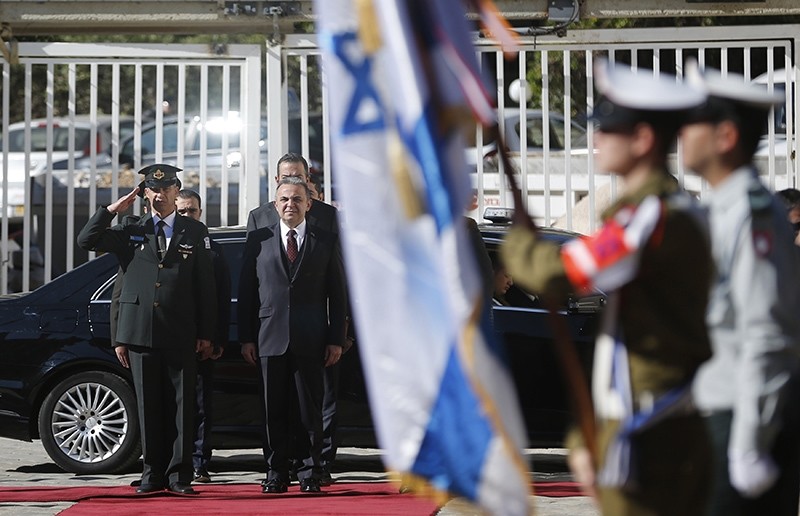 Turkish ambassador to Israel Kemal u00d6kem stands for the Turkish national anthem before presenting his diplomatic credentials to Israeli President (AFP Photo)
by Daily Sabah with Agencies Dec 12, 2016 12:00 am

Turkey's ambassador to Israel submitted his credentials to Israel's President Reuven Rivlin in Jerusalem on Monday as part of reconciliation efforts following a five-year diplomatic spat.

Kemal Ökem was received by Rivlin during a ceremony at his residence in Jerusalem, the president's office said, with the Israeli president offering condolences for the twin bomb attacks that killed 44 people in Istanbul on Saturday.

Rivlin said he hoped the exchange of ambassadors "will open a new and promising page" in the relationship between the two countries.

Ökem is his country's first envoy since Israeli commandos raided a Gaza-bound ship of activists in 2010, sparking an unprecedented feud between the two allies.

The relations between the two countries soured after the 2010 Mavi Marmara flotilla incident, where Israeli soldiers attacked a Gaza-bound humanitarian aid vessel. The Mavi Marmara was leading a flotilla of ships in international waters when Israeli soldiers raided the ship and killed nine Turkish citizens and one Turkish-American dual national. One of the Turkish nationals, Uğur Süleyman Söylemez, died in the hospital in 2014 after being in a coma for almost four years.

Israeli Prime Minister Benjamin Netanyahu in March 2013 apologized to then Prime Minister Recep Tayyip Erdoğan for the raid. Israel agreed to increase reparations for the victims to $20 million and a draft of an agreement between the two states was written in February 2014. The countries also agreed that Parliament would drop the lawsuits against the Israeli soldiers who were involved in the raid with a new law. Israel paid $20 million in compensation in September and offered an apology over the raid and granted permission for Turkish aid to reach Gaza. The rift came to an end in June after long-running secret talks in third countries.

At the Monday ceremony, Ökem said he hoped Israeli-Turkish "cooperation will also work for the benefit of other nations, particularly to the Palestinian Authority."

Ökem, previously the chief foreign policy adviser to Prime Minister Binali Yıldırım, also worked as an adviser to former Prime Minister Ahmet Davutoğlu. He worked for the Foreign Ministry's Middle East directorate and was previously posted overseas in Turkey's London and Riyadh embassies, according to the Foreign Ministry. He also spent time working as the permanent representative to NATO.

Born in Ankara in 1967, Ökem graduated from the Middle East Technical University and completed a master's and doctorate at the Ankara-based university. He also has a master's degree from Oxford University.