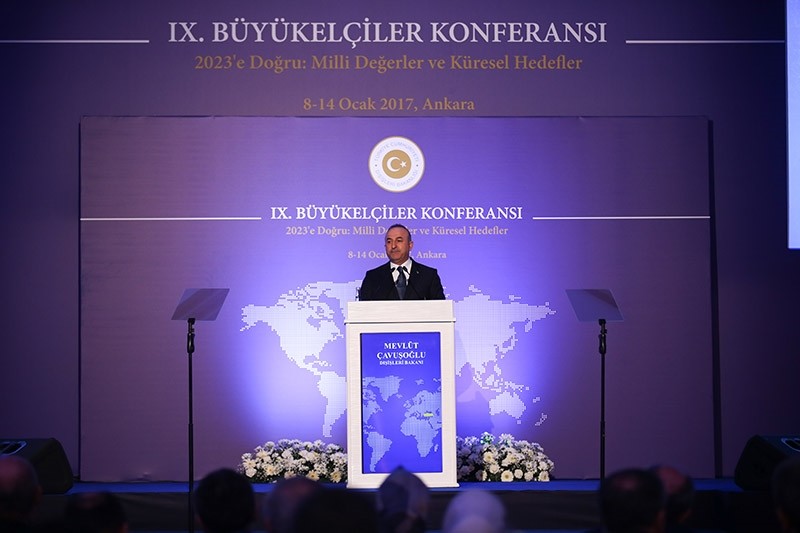 As the Ninth Ambassadors Conference of the Turkish Foreign Ministry enters its second day, Foreign Minister Mevlüt Çavuşoğlu has listed two primary expectations from the upcoming Trump administration - extradition of Fetullah Gülen and cease support to PYD - while expressing his confidence that the mistakes made by the previous administration will not be repeated.

Speaking at the annual Ambassadors Conference in Ankara on Monday, Minister Çavuşoğlu said: "We [Turkey] have two primary expectations. The first is the extradition of FETÖ [Gülenist Terror Group] leader [Fetullah Gülen] as well as other [FETÖ] officials as soon as possible and the second is [that the U.S. will] end cooperation with the PKK's Syrian offshoot, the Democratic Union Party (PYD), and its armed wing, the People's Protection Units (YPG)."

Meanwhile, President Recep Tayyip Erdoğan spoke at the 9th Annual Ambassadors' Conference in Ankara and highlighted that Turkey wants to see the U.S. support its ally Turkey against all terrorist threats, including Daesh and the Gülenist Terror Group (FETÖ), without any hesitation. "In particular, I believe that we will gain momentum regarding regional issues through common understanding" Erdoğan said.

Ties between Turkey and the U.S. have been especially strained in the late-Obama era, as the U.S. has been reluctant to arrest and extradite U.S.-based terror leader Gülen. Tensions also became strained amid Washington's backing of YPG terrorists, under the guise of fighting Daesh in northern Syria. While developments surrounding these two main issues will likely be the determining factors in the new era of Turkish-U.S. relations, Minister Çavuşoğlu said Monday that Turkey believes U.S. President-elect Donald Trump will not make the same mistakes as the previous administration regarding relations with Turkey while adding that Turkey expects Washington to extradite Gülen and to halt its cooperation with the PKK-affiliate PYD-YPG. He also noted that these expectations carry "vital" importance for bilateral relations.

Çavuşoğlu expanded his remarks to include the latest developments in Iraq, noting that "We [Turkey] are confident that Iraq will establish a comprehensive political order, permanent peace, security and stability. We do not want this country [Iraq] to become a shelter for Daesh, the PKK and other similar terror groups." While emphasizing that developments in Iraq have a direct effect on Turkey, Çavuşoğlu also said that Turkey will continue to maintain its constructive role in Iraq. With regard to the ongoing Syrian crisis, the Turkish foreign minister expressed Turkey's determination in supporting the territorial integrity and political unity in Syria.

Criticizing the EU for failing to fulfill its promises to Turkey, Minister Çavuşoğlu said that the EU must display a sincere position in its counterterrorism approach: "We have been present in Europe's past and will take part in shaping its future. ...Without Turkey, the EU will be incomplete. Xenophobia and Islamophobic populism will impede Europe's progress," he added. Çavuşoğlu also explained the expectations Turkey has placed on the EU, which include displaying a sincere position in combat against the PKK and FETÖ, providing visa liberalization for Turkish citizens and the opening of additional chapters.

The Ambassadors Conference began its first day with a large crowd that also included Deputy Prime Minister Tuğrul Türkeş, Family and Social Policies Minister Fatma Betül Sayan-Kaya as well as Justice and Development Party (AK Party) Deputy Chairman Mehdi Eker. The ambassadors' wives will also be hosted by Turkey's First Lady Emine Erdoğan as part of the conference program. The second day of the conference is to continue with several sessions regarding topics under the theme of "Towards 2023: National Values and Global Goals."