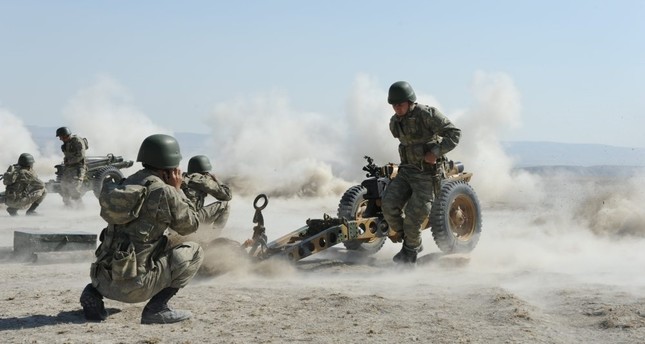 Ankara has been asserting its role in Syria both on the ground and at the table. The Turkish military has been in the Syrian soil since late August 2016.

Having asserted its role in Syria in the fight against Daesh and in Iraq where Turkish forces have trained fighters on Iraqi soil for some time, Turkey has also asserted itself at the diplomatic roundtable, as evident in U.K. Prime Minister Theresa May's stop in Ankara over the weekend where she met with President Recep Tayyip Erdoğan and Turkish Prime Minister Binali Yıldırım upon returning to Europe from her meeting with U.S. President Donald Trump.

The British prime minister's meetings in Ankara mark the willingness of both countries to embark on more innovative and comprehensive efforts for cooperation in the region. During a joint press conference held between President Erdoğan and Prime Minister May on Saturday, the president indicated that he is keen on collaborating with May on new cooperative concepts moving forward with the U.K. in the new era of the fight against terrorism: "Syria and Iraq. ...These issues are a major contributing factor in Turkish-British relations," the president said.

Erdoğan asserted that Turkey strives to base bilateral relations on an entirely different concept, asserting that "We [Turkey and the U.K.] have discussed these issues."

The British prime minister said Turkey and the U.K. were trying to create conditions for establishing "peace" while remaining committed to the counter-terrorism fight against Daesh in Syria.

Since the U.K. announced its decision to part ways with the EU in a referendum last year, critics have warned the U.S.-led coalition forces fighting Daesh in Syria and Iraq may also be adversely affected by this change.

Prime Minister May, who paid her first official visit to Turkey as prime minister,also discussed the recently-held Astana peace talks as well as the upcoming Geneva talks slated for the end of February as leaders continue to reach a political solution on Syria.

Regarding the situation on the ground in Syria where the counter-terrorism fight against Daesh terrorists continues, May addressed the struggle to create peaceful conditions and the challenge of mass migration, saying: "The U.K. is committed to doing all it can to help."

On a different note, stating that the security issue is also a headlining topic on the agenda, Yıldırım said: "We held a comprehensive meeting and discussed bilateral relations, including security and the economy. We brought a common will to the table to enhance relations." The two countries will cooperate in the area of defense as well." Prime Minister May said: "We are announcing today a new and unique government-to-government agreement between Turkey and the U.K. that [establishes a] new framework for cooperation and dialogue between our governments, including the defense ministries and the air forces."

Commenting on the issue, Yıldırım said that the U.K. signed a framework contract with Turkey to design new fighter jets for Turkey and this step will help take cooperation in defense to a further stage.

Turkey and the U.K. have been on the same page regarding the presence of the PKK's Syrian offshoot the Democratic Union Party (PYD) and its armed wing the People's Protection Units (YPG) in Syria. U.K. Special Representative for Syria Gareth Bayley said in late June 2016 that the U.K. did not recognize the announcement of the Rojava administration in northern Syria, adding that they were aware of the links between the PYD, its armed militia the YPG and the PKK terrorist organization in Turkey.

"We are also aware of the patterns of coordination that we see between the YPG, the Syrian-Arab army, the Syrian Air force and the Russian air force on the ground in operations against the moderate armed opposition," he said.

As Ankara tries to mediate between the Syrian opposition and the Assad regime to reach a political solution in the country, a new era of Turkish-UK relations could be a significant factor in the region.