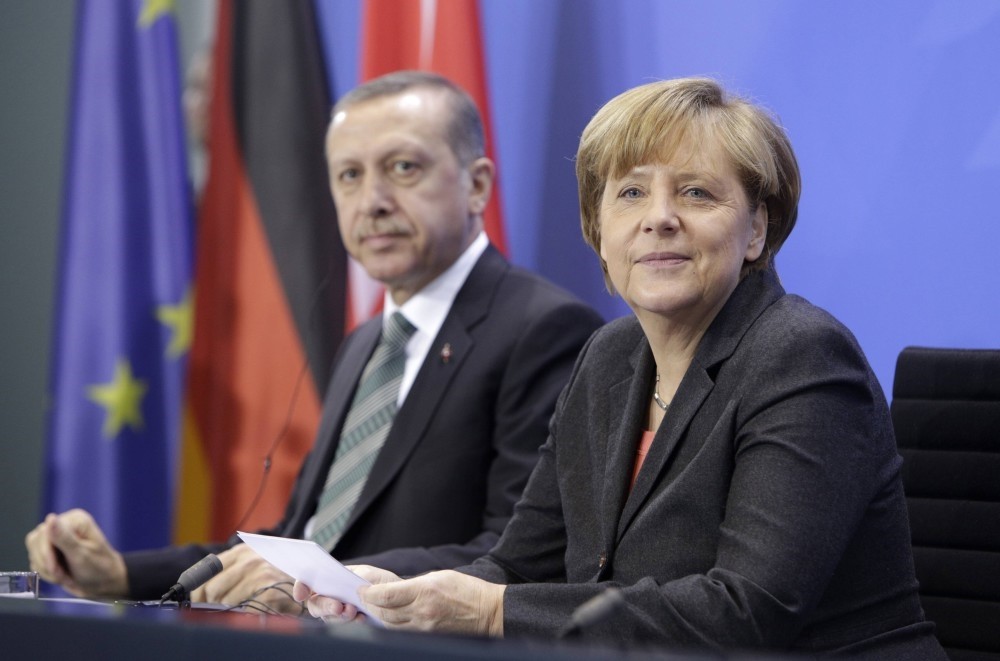 Turkish PM Binali Yıldırım is expected to meet his German counterpart Angela Merkel Thursday amid Ankara's increased annoyance toward Berlin's reluctance to cooperate against terror groups including the PKK and FETÖ, as well as continuing to shelter fugitive terrorists

Ankara is prepared to host another significant guest shortly after British Prime Minister Theresa May's visit last week as Prime Minister Binali Yıldırım is set to meet German Chancellor Angela Merkel Thursday in cooperative efforts against the Gülenist Terror Group (FETÖ) and terrorist PKK which top the agenda. Experts have described Merkel's visit as an opportunity to recover recently strained relations due Germany's lack of cooperation in counterterrorism operations against the terrorist FETÖ, PKK and People's Liberation Party-Front (DHKP-C). As the German chancellor prepares to meet with Turkish Prime Minister Yıldırım upon her arrival in Ankara Thursday, sources have further indicated that President Recep Tayyip Erdoğan will also welcome Merkel at the meeting.

German sources have additionally noted that Merkel is expected to make a statement and take questions during a possible joint press conference with Yıldırım. During her one-day visit, the German chancellor is also expected to visit the Turkish Parliament, which was heavily bombed by FETÖ terrorists during the July 15 failed coup attempt. The late visit by Merkel comes nearly five months after the vicious coup attempt and holds crucial importance amid efforts to mend strained relations.

Zafer Sırakaya, head of the Union of European Turkish Democrats (UETD) spoke to Daily Sabah and underlined that Merkel's visit may be an opportunity for bilateral relations between the two countries to be restored, also noting, "We have seen in the past how a Europe without Turkey is unsafe, especially in the context of the negative effects of the Syrian crisis on Europe as Turkey has asserted its role as a 'buffer zone' for the last three years now." Drawing attention to the terror attacks conducted by the PKK, Daesh and the DHKP-C threatening Turkey's stability, the UETD's Sırakaya stressed that Turkey must have support in its counterterrorism fight, especially when considering "the security of European countries" and the issue of the alliance.

"We hope that Germany will provide Turkey with an effective support system in combating the Democratic Union Party (PYD) and its armed wing, the People's Protection Units (YPG), as well as all other terror organizations," Sırakaya added.

While FETÖ terrorists have a wide network in Germany and use the country as their "headquarters" in Europe, Turkish-German relations also became increasingly strained recently due to the latter's alleged support to the PKK. Additionally, sympathizers of the PKK terrorist organization are enjoying freedom across Germany despite the group being recognized as a terrorist group by the EU. In fact, Turkey's Defense Minister Fikri Işık recently called on Germany to deny the asylum requests of 40 former Turkish soldiers allegedly linked to FETÖ. He said German authorities and the judiciary "must assess them very carefully" and reject their application for asylum.

On a side note, between 2006 and 2016 Turkey has demanded the extradition of a total of 136 PKK terrorists from Germany. The German government agreed to hand over only three of them to Turkish authorities, the Justice Ministry announced. In that framework, in his latest column, Daily Sabah columnist Ozan Ceyhun also described Germany's understanding in the fight against terror as "quite insufficient." He also said, "If Merkel wants to return to her country with good news from Turkey before the general elections, she must first come to Turkey with good news about the fight against the PKK, PYD and FETÖ." Analogous to Ceyhun, the UETD president stressed that Germany needs to follow more effective fights against terrorism in the upcoming process, adding that Germany must realize that Islamophobia or making anti-Turkey or anti-Erdoğan statements or taking such a stance will bring no gains to Europe."

Furthermore, Merkel's visit to Ankara on Thursday is also critical as the elections in Germany are approaching and Merkel's "open-door policy" on Syrian refugees tops the political agenda in German politics. Maintaining the refugee deal made between Turkey and the EU is highly crucial for Merkel to remain in power, especially at a time when Germany is facing heavy criticisms due to its current refugee policies. On that note, the refugee deal along with cooperation tops the agenda between Merkel and Yıldırım as well as President Erdoğan. Commenting on the matter, Enes Bayraklı, an academic and foreign affairs specialist, said that the continuation of the refugee deal will "directly influence Merkel's political performance."

He also added that "despite Merkel's aims to maintain the refugee deal, Turkey is yet to get what it wants from the EU and Germany." Continuing on by drawing attention to the "negative perception" among the Turkish public against Germany, Bayraklı said "the German public and especially some groups conducted and continue to conduct anti-Turkey campaigns within the country and this obviously ties down Merkel's hands. However, regardless of the anti-Turkey campaigns, the German government does not desire to alter the matter as they do not display a determined position." He finalized his remarks by stating that the tensions in bilateral relations are not to decline if the German side does not take a determined position and action on the matter.
Last Update: Feb 01, 2017 1:39 am
RELATED TOPICS