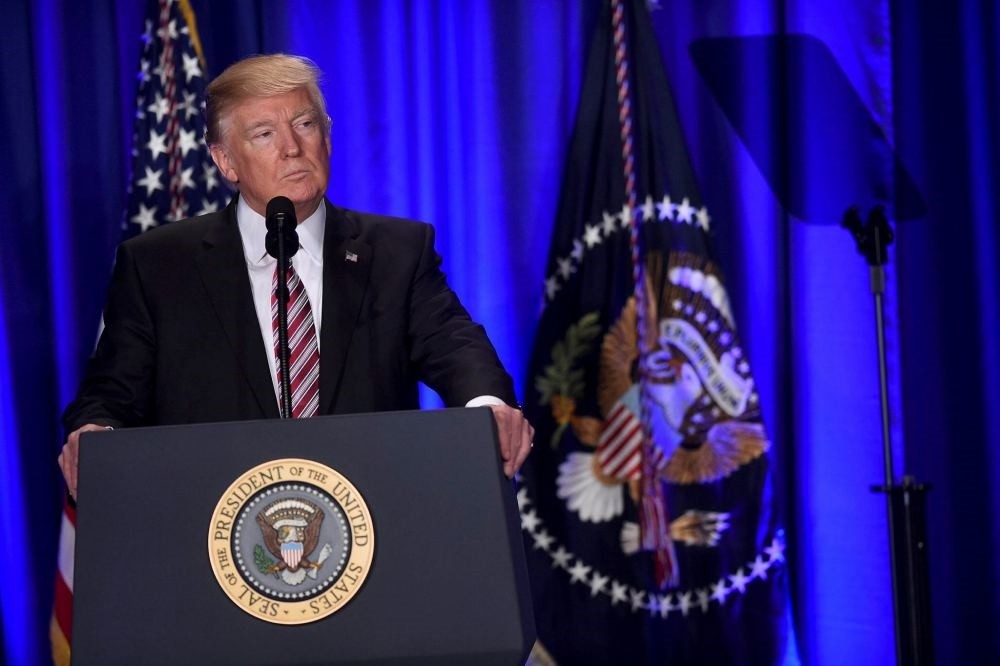 The U.S. National Security Adviser Michael Flynn speaks during the daily news briefing at the White House, in Washington, Feb. 1.
by Daily Sabah with Wires Feb 03, 2017 12:00 am

U.S.-Iran relations have become more hostile than ever as the White House takes an aggressive posture toward Tehran over test-firing a ballistic missile that could raise tensions in the already chaotic region

U.S. President Donald Trump said in a tweet on Thursday that "Iran has been put formally on notice" for firing a ballistic missile, after his administration said on Wednesday it was reviewing how to respond to the launch. While the exact implications of the U.S. threat were unclear, the new administration signaled that President Donald Trump intended to do more, possibly including imposing new sanctions, to curb what he sees as defiance of a nuclear deal negotiated by then-President Barack Obama.

The tough talk commits the administration to back up its rhetoric with action, which could cast doubt on the future of the Iran agreement and sow further uncertainty in an already chaotic Middle East, experts said.

A fiery statement from Trump's national security adviser, Michael Flynn, marked some of the most aggressive rhetoric by the administration that took office on Jan. 20, making clear that Obama's less confrontational approach toward Iran was over.

In addition to nuclear deal, a series of brief naval encounters between U.S. warships in the Gulf and Iranian ships also increase tension between the two countries. There were 35 incidents in the first half of 2016, according to the Pentagon, which could lead to conflict if managed improperly. As a latest move in the Gulf, the U.S. and four other allied navies reportedly started a three-day maritime exercise in international waters next to the Iranian shoreline. "The exercise is intended to enhance mutual capabilities, improve tactical proficiency and strengthen partnerships in ensuring the free flow of commerce and freedom of navigation," a U.S. Navy press release said, Al-Arabiya reported on Wednesday.

International sanctions on Tehran were lifted in January last year under a nuclear deal brokered in 2015 by Britain, France, Germany, China, Russia and the United States.

Under the nuclear deal Iran agreed to curb its nuclear program in exchange for lifting of most sanctions. According to a 2015 U.N. resolution endorsing the deal, Iran is still called upon to refrain from work on ballistic missiles designed to deliver nuclear weapons for up to eight years.

News of Iran's reported cruise missile test came hours after Washington said it was putting Iran "on notice" for its ballistic missile test and signaled that it could impose new sanctions.

Iran confirmed on Wednesday that it had test-fired a new ballistic missile, but said the test did not breach the Islamic Republic's nuclear agreement with world powers or a U.N. Security Council resolution endorsing the pact.

Iran has test-fired several ballistic missiles since the nuclear deal in 2015, but the latest test was the first since Trump became president.

A top adviser to Supreme Leader Ayatollah Ali Khamenei yesterday said Iran will not yield to U.S. threats over a recent ballistic missile test that was aimed at limiting its defense capabilities.

"This is not the first time that an inexperienced person [U.S. President Donald Trump] has threatened Iran ... the American government will understand that threatening Iran is useless," Ali Akbar Velayati said. "Iran does not need permission from any country to defend itself," he was quoted as saying by the semi-official Fars news agency.

The row comes against a backdrop of already-strained relations over U.S. President Donald Trump's travel ban on citizens from Iran and six other Muslim-majority countries. Iran condemned the order as an "open affront against the Muslim world and the Iranian nation" and vowed to retaliate. Of the seven countries targeted, Iran sends the most visitors to the United States each year - around 35,000 in 2015, according to the Department of Homeland Security. Iranian Foreign Ministry stated that it will take will take legal, political and reciprocal measures accordingly.
Last Update: Feb 03, 2017 10:54 am
RELATED TOPICS