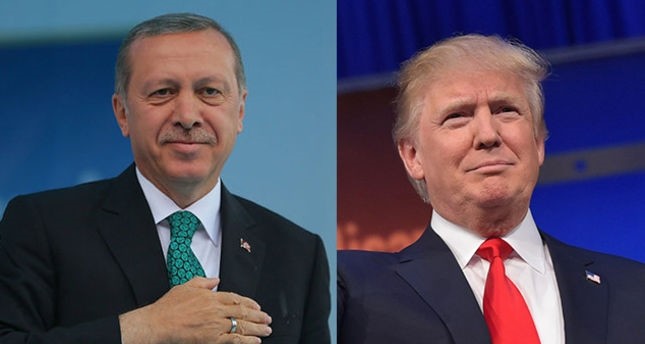 President Recep Tayyip Erdoğan and U.S. President Donald Trump agree on increasing cooperation in the fight against Daesh, while Ankara urges the new administration in Washington to support Turkey's fight against the PKK terror organization's Syria-affiliate, the YPG, and FETÖ, during the first meeting between the two leaders, held in a phone conversation

The first talk between President Recep Tayyip Erdoğan and new U.S. President Donald Trump was held early Wednesday with the fight against Daesh and the Gülenist Terror Group (FETÖ) headlining their meeting over a 45-minute telephone conversation.

Presidential sources in Turkey said the meeting was held on a positive tone, where President Erdoğan underscored the need of cooperation between the U.S. and Turkey in the fight against Daesh and FETÖ, while urging the new administration to support Ankara against the PKK terrorist organization while refraining from supporting its Syria affiliate the Democratic Union Party (PYD) and its armed wing the People's Protection Units (YPG).

Meanwhile, the White House said in a statement that the meeting between Erdoğan and Trump highlighted the "close, long-standing relationship between the United States and Turkey and their shared commitment to combating terrorism in all its forms," and added that the U.S. supports Turkey "as a strategic partner and a NATO ally, and welcomed Turkey's contributions to the counter-ISIS campaign," using another acronym used for the Daesh terror group.

The two leaders also discussed the most recent developments in Turkey's operation in Syria's al-Bab and the need for a more effective coordinated operation on Raqqa.

​Cooperation against Daesh must be increased

During a televised interview, Presidential spokesperson İbrahim Kalın confirmed that an agreement was reached between both President Erdoğan and Trump on the need for increased cooperation against Daesh, and that Ankara has proposed a detailed road map to Washington on a possible operation against the Daesh stronghold Raqqa, and that discussions are currently underway.

Kalın also added that Ankara communicated its concerns over issues left behind by the Obama administration (FETÖ and support to the PKK-affiliated YPG), and that Trump responded that these issues are being dealt with by the relevant units in his administration.

As Turkey looks to open a fresh chapter with the new administration in Washington, Trump has a set of disagreements left by former U.S. President Barack Obama that he needs to deal with, although the two states have historically benefited from strong political and economic relations.

Perhaps the most intense disagreement between Ankara and Washington concerns the U.S.'s support of the Syrian Democratic Forces (SDF), which is predominantly led by the PKK terror organization's Syrian offshoot the PYD.

Turkey, the U.S. and the EU recognize the PKK as a terrorist organization. The EU and the U.S., however, do not categorize the PYD/ YPG as such, even though Turkey strongly opposes any PKK-affiliated group south of its border, both in Iraq and Syria, saying it constitutes a national security threat to its borders.

The disagreement over support to the YPG was explicitly visible in the operation on Raqqa, where the U.S. utilized the YPG against Turkey's argument that Washington and Ankara should be the forces in the offensive in addition to the moderate local forces. In addition, according to the U.S. media, the Obama administration had plans to increase the military support to the YPG in the Raqqa operation, which was later handed over to the Trump administration.

However, this was scrapped from the agenda by the new administration, as it was thought to be "poor staff work." A senior official in the Trump administration was cited by the Washington Post on Feb. 2, saying, "They provided the information, but we found huge gaps in it."

Speaking to Daily Sabah, Mehmet Şahin, a professor of political science at Gazi University, said Turkey-U.S. relations were strained as the Obama administration did not take into consideration Turkey's sensitivities regarding the PKK terror group's Syrian-affiliate the PYD, and the lack of timely support to the Turkish government after the July 15 coup attempt by FETÖ led by Fetullah Gülen, who has lived in the U.S. since 1999.

"If the new administration takes into consideration Turkey's sensitivities, it is expected that relations will be repaired. In addition, Turkey's effective and successful fight against Daesh in northern Syria will play an important role in rebuilding the relationship between Ankara and Washington as Trump also has a determined stance in the fight against Daesh. Within this framework, Pompeo's visit to Ankara also has significant value for both the U.S. and Turkey's long-term interests," Şahin said.

"The new administration's relations with Iran will also play a significant role in relations with Turkey. While Obama had picked Iran as a partner, the Trump administration calls it a 'terrorist state.' The U.S. will not maintain conflicting relations with both Iran and Turkey for its long-term interests in the Middle East," Şahin added.

Also speaking to Daily Sabah, Ali Çınar, an expert in Turkey-U.S. relations, said Trump's appreciation for Turkey's fight against Daesh is significant at a time when Turkey treats FETÖ as a terror organization.

"I believe that Trump will also take on Turkey's advice on Syria policy," Çınar said and added that the fact that Pompeo will visit Turkey right after the talk between the two leaders is a sign that the U.S. does not foresee success in the Middle East without Turkey on its side.

Washington has recently called Iran, which enjoyed a relatively good term during Obama's presidency, a state backing terror organizations. According to a recent report by Reuters, the Trump administration could potentially be designating Iran's influential Islamic Revolutionary Guard Corps (IRGC) as a terrorist organization, citing U.S. officials. The IRGC has both political and economic influence over the Iranian state and government. While there has not been any further details revealed by the White House, Iran denied any involvement in terrorist activities.

With its assertive foreign policy moves so far, particularly against Iran, and also China, the Trump administration has also voiced the need for the U.S. to reestablish relations with Turkey, a U.S. ally whose trust in the U.S. diminished during Obama's term in the White House.

Secretary of State Rex Tillerson had said during his confirmation hearing in front of the Senate Foreign Relations Committee on Jan. 11 that the U.S. needs to reassess its relations with Turkey, particularly on issues related to Syria and the Middle East in general.

Criticizing the Obama administration's Syria and the Middle East policy, Tillerson said: "Russia, Turkey and Iran are dictating the terms in Syria, absent our participation."

"We have to reengage with President Erdoğan in Turkey, this is a long-standing NATO ally," Tillerson had added.

The creation of a designated zone for refugees in northern Syria, which has been termed as a "terror-free zone" by President Erdoğan and on a similar token as "safe zones" by the Trump administration, was also among the discussed topics during the conversation between the two leaders, the presidential spokesperson also confirmed Wednesday.

Trump had said on Jan 25. that he will order the State Department and the Department of Defense to propose plans to set up a safe zone for refugees fleeing the Syrian conflict since 2011, a proposal Turkey has backed for several years, despite former U.S. President Barack Obama's reluctance.

"I'll absolutely do safe zones in Syria for the people," he added. While there were no details given on how the safe zone will be established, this issue will likely grant both countries strong leadership on the table for a solution to the refugee issue.

Following an increase in the number of terror threats, coming from northern Syria into Turkey, the country launched Operation Euphrates Shield while backing the opposition the Free Syrian Army (FSA) against terrorist elements including, Daesh as well as the PKK-affiliated PYD/YPG.

According to Ankara's plans, a 5,000-square-kilometer area will be designated as a "terror-free zone," where Syrian refugees will be placed in order to spare them from having to flee their country. Currently, an approximate 2,000-kilometer-square area has been freed from Daesh, including the towns of Azaz, Jarablus, al-Rai, and Dabiq, a town which has a significant symbolic value for Daesh.

Turkey urges US to extradite Gülen

Another issue waiting to be discussed between Ankara and Washington is the extradition of FETÖ, Fetullah Gülen, who has been residing in the U.S. since 1999.

Ankara has repeatedly voiced a willingness to start with a clean slate and hopes that the Trump administration will not repeat the mistakes made by that of Obama in regards to U.S.-Turkey relations, and expects Washington to extradite Gülen.

With regards to the July 15 coup attempt by FETÖ members, in an interview with the New York Times on July 21, Trump had said on President Erdoğan's response to the coup: "I give great credit to him for being able to turn that around," and added: "the amazing thing is that the one who won was the people. They came out on the streets, and the army types didn't want to drive over them like they did in Tiananmen Square when they sort of drive them over, and that was the end of that. Right? People said, I'm not going to drive over people. The people came out of their homes, and they were not in favor of what the military was doing. So that was quite impressive from the standpoint of existing government."

The presidential spokesperson also added that FETÖ problem is not one of Turkey only, but they are a threat to any country in which they function. Kalın said this was also conveyed during the conversation between Erdoğan and Trump, and those measures against Gülen were communicated with the White House, including his arrest.

"There are possible measures which can be taken. On this issue, President Trump and Mr. Flynn will launch an initiative," Kalın added.

The U.S. has been reluctant to arrest and extradite FETÖ leader Gülen, despite official requests submitted to U.S. authorities by Turkey's Justice Ministry as per the extradition treaty signed between the two countries.
Last Update: Feb 09, 2017 2:59 pm
RELATED TOPICS