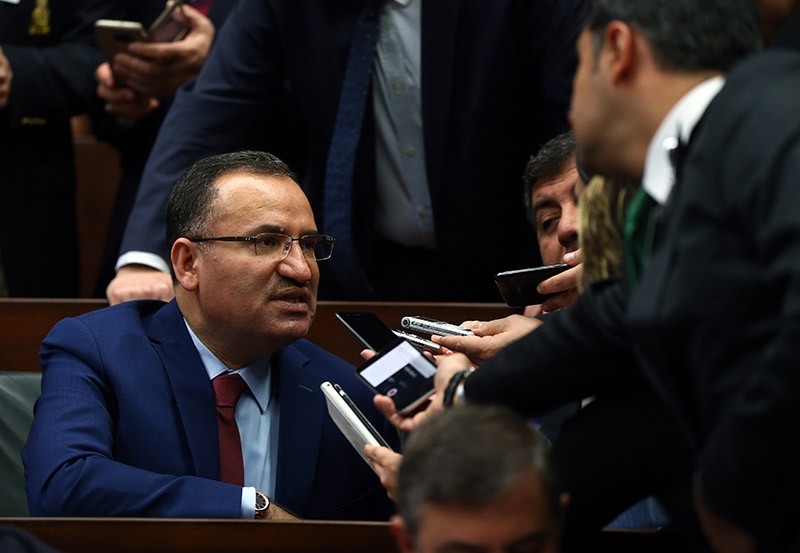 Turkish Justice Minister Bekir Bozdağ said on Tuesday that he will soon talk to his U.S. counterpart Jeff Sessions about Gülenist Terror Group (FETÖ) leader Fetullah Gülen's extradition from the U.S., adding that there will be no need to send further evidence.

Speaking to reporters prior to a Justice and Development Party (AK Party) parliamentary group meeting, Bozdağ said he will either have a phone conversation with Sessions or meet with him face-to-face as soon as possible. The minister said this will give him a chance to convey Ankara's expectations of the U.S. regarding Gülen's and other Gülenists' extradition and what it means to Turkey. Bozdağ asserted that positive developments could unfold in the new term under the Trump presidency.

Prime Minister Binali Yıldırım commented on the issue as well. Addressing AK Party deputies, the prime minister said Turkey's work towards the extradition of Gülen continues at full steam. "We delivered the evidence. Our talks with the new administration continue. We await their steps," he said. After a bitter term with the Obama administration over several issues, especially the extradition of Gülen, the Trump era ushers in a glimpse of hope for Ankara.

"Especially in efforts to revamp Turkish-U.S. relations, we expect the Trump administration to conduct a reassessment of its position on Turkey and reconsider its position on two primary matters, the first of which is the extradition of the retired preacher Gülen, who lives in self-imposed exile in the U.S. as the purported leader of an outlawed Turkish gang which conducted crimes against the nation during the failed July 15 coup attempt. The second fundamental matter is halting U.S. support for the Democratic Union Party," said Deputy Prime Minister Numan Kurtulmuş following Trump's move into the Oval Office.

Rebuffing claims that there is a lack of evidence submitted to the U.S., Bozdağ said "there is more than enough evidence" to temporarily detain Gülen and then extradite him. Under a 1979 treaty between Turkey and the U.S., Ankara has a right to expect Washington to temporarily detain Gülen and extradite him following a legal process. Turkey officially submitted evidence to the U.S. in October 2016 regarding Gülen's network, which formed a quasi-state within the Turkish state and attempted to topple the government with the ultimate intent to take over the state via a vicious coup.

Despite President Recep Tayyip Erdoğan and Minister Bozdağ's determined efforts, the Obama administration chose to remain idle and took no action against the U.S.-based cult leader. Gülen is accused of running a terrorist group from his compound in Pennsylvania, U.S. The cult-like group has a global network that infiltrates state institutions, judiciary and police departments. The cult attempted to stage a coup in Turkey on July 15, 2016. The failed coup, which left 248 people dead and nearly 2,200 injured, was allegedly organized by followers of Gülen.