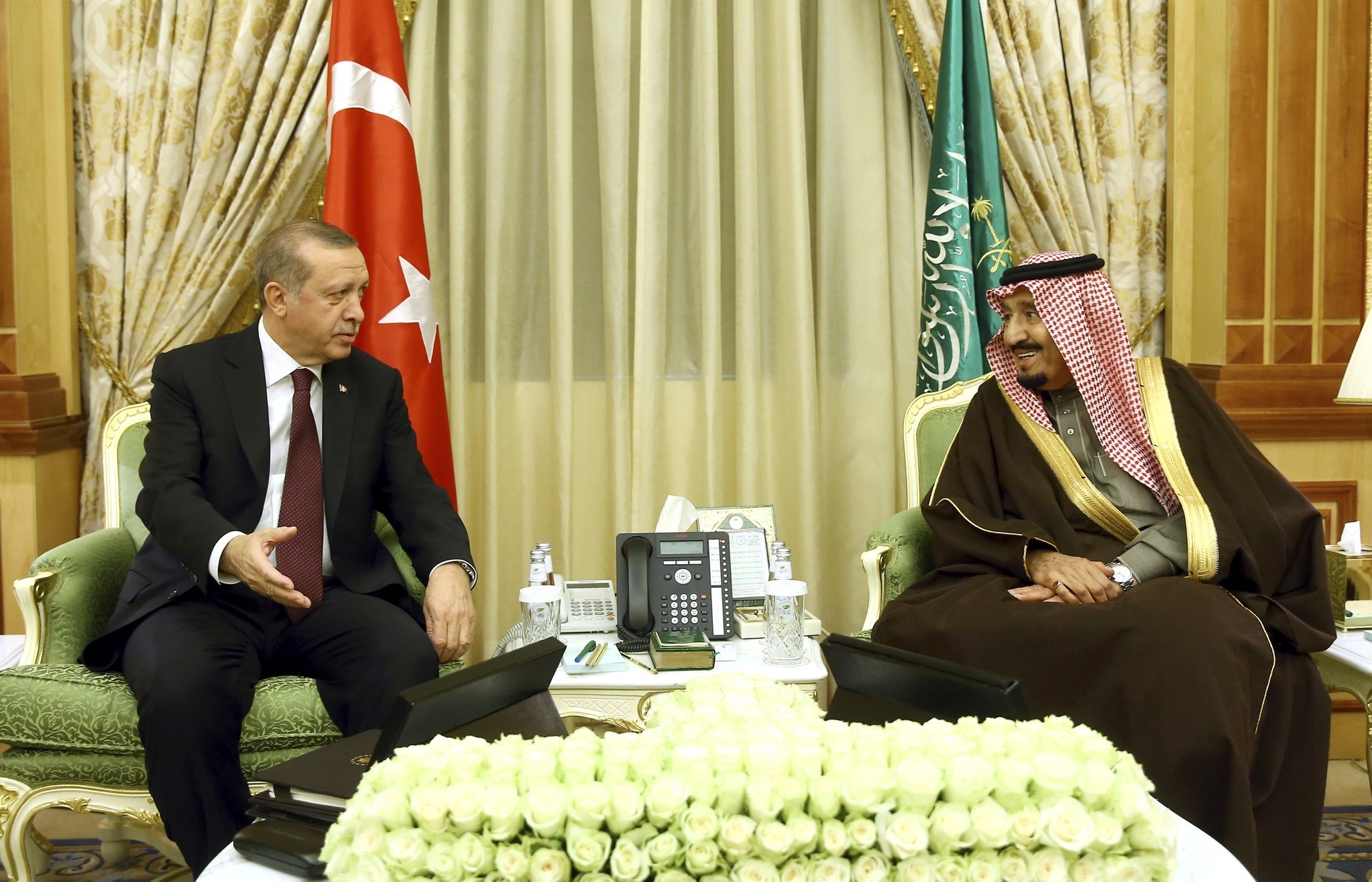 President Erdou011fan met with Saudi King Salman in Riyadh Tuesday to discuss regional issues as well as the future of economic partnership.
by Mustafa Kırıkçıoğlu Feb 15, 2017 12:00 am

President Erdoğan was warmly received by King Salman upon his arrival in Riyadh on Monday night. In addition to an intense political and economic agenda, the two leaders are expected to focus especially on the latest developments regarding the Syrian crisis, including plans for establishing a ‘safe zone’ in northern Syria

President Recep Tayyip Erdoğan went to Saudi Arabia on Monday for an official visit to strengthen political and economic relations as well as discuss regional issues; notably the Syrian crisis.

He was warmly welcomed by King Salman bin Abdulaziz of Saudi Arabia at the Riyadh airport on the second leg of his four-day tour across three Gulf states, where the president aims to improve ties with Bahrain, Saudi Arabia and Qatar.

On Sunday, Erdoğan arrived in Bahrain's capital of Manama and expressed his wish that the two countries will work together for the "stability, peace and future of the region."

Developments in Syria are likely to be one of the focal points during his visit to Saudi Arabia. Since President Erdoğan, just before beginning his Gulf trip on Sunday, said that the Turkish military and Free Syrian Army (FSA) had entered al-Bab's city center, emphasizing that Turkish-backed troops would go on to liberate Manbij, a town held by the PKK's Syrian offshoot the Democratic Union Party (PYD), and Daesh-held Raqqa, saying: "We are trying to eliminate terror in the region. That goal is about to be reached in al-Bab before we move on to Raqqa and Manbij afterwards." Also speaking in Manama on Monday the president called for a "safe zone" in northern Syria for Syrians displaced by the war.

Safe zone plan in northern Syria on the table

"Upon understanding that Turkey and Qatar are in the right position in relation to maintaining stability and peace in Syria, Saudi Arabia started to stand by these two countries, especially after Salman ascended the throne," said Turan Kışlakçı, a Middle East expert and freelance journalist who spoke to Daily Sabah.

"If Ankara, Riyadh and Doha would agree on the 'safe zone' idea that has been voiced by President Erdoğan, it would greatly benefit the people in the region, while also curbing Iran's expansionist policies."

Kışlakçı asserted that the foremost reason for Erdoğan's visit to the Gulf countries is to make an agreement on the "safe zone" plan as well as to garner support from other Gulf countries in the buffer zone bid: "If the most important players in the region - Turkey and Saudi Arabia - have a deal, then Russia should set aside its objections and reach an agreement with Ankara and Riyadh," he said.

Last week, Saudi Foreign Minister Adel al-Jubeir said in Ankara that the positions of Saudi Arabia and Turkey on Syria are "absolutely identical." He attended the first meeting of a coordination council to enhance ties between the two countries.

Turkey has also strongly insisted that Saudi Arabia and Qatar be included in the Astana peace talks, but the Assad regime and Iran vehemently oppose their attendance.

Turkey, Iran and Russia gathered in the Kazakh capital to attend the Astana peace talks between the Syrian opposition and the Assad regime on Jan. 23-24. During the talks, the three countries agreed on a joint mechanism, designed to monitor any cease-fire violations, in an attempt to curb the bloodshed in Syria.

Military cooperation on the rise between Turkey, Gulf states

Turkey also has important collaborations militarily with Gulf states. Ankara has been hosting Saudi warplanes at its İncirlik Air Base as part of the U.S.-led coalition against Daesh while Riyadh and Ankara conducted four joint military drills to target terrorism in the past year. In his recent visit to Gulf countries, Erdoğan is accompanied by Turkey's Chief of General Staff Gen. Hulusi Akar.

The countries have collaborated not only on economic and political issues, since Ankara and Riyadh signed four agreements also in the cultural and media sectors during a visit to Turkey by Saudi Crown Prince Mohammed bin Nayef last year. Also, in April 2016, King Salman visited Erdoğan, who awarded him a rare honor, the Order of State.

Anadolu Agency's Qatar correspondent, Ahmed Yusuf, talking to Daily Sabah, said, Turkey and the Gulf nations have many common interests and that is why they are acting together on regional issues such as Yemen and Syria.

"Being a 'regional balance factor,' Turkey holds a very important place in the eyes of Gulf countries, especially in their relations with Iran," Yusuf said. "Likewise, Turkey reaches Yemen, Libya and Egypt through the Gulf nations."

He added that despite some divisions between Turkey and Saudi Arabia, particularly regarding Egypt, the Iran-Russia alignment presents a valid reason for Riyadh and Ankara to stand together, especially in regards to Syria.

"Unlike Iran, Turkey doesn't wield on sectarian and nationalistic issues for its own benefits," he said.

From Riyadh, President Erdoğan went to Qatar on yesterday evening, another country with a history of solid relations with Turkey for years. Qatar also hosts a Turkish military base.