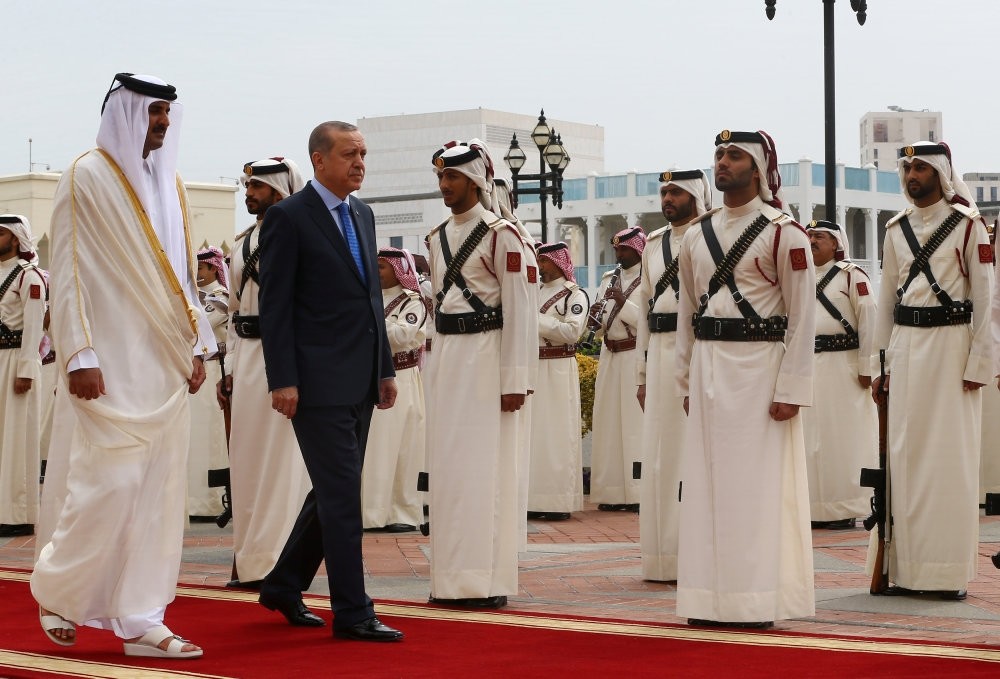 President Erdoğan visited Qatar Wednesday, the third and last stop on a four-day tour across three Gulf states, to discuss political and economic issues and the ongoing regional crises in Syria and Iraq

President Recep Tayyip Erdoğan arrived in Qatar on Tuesday for political and economic talks focused on regional and international developments, including the ongoing crises in Syria and Iraq. The visit is as part of Erdoğan's four-day Gulf tour to boost cooperation and bilateral relations. The president is expected to hold talks with Qatari Emir Sheikh Tamim bin Hamad Al-Thani.

Before visiting Qatar, Erdoğan visited Bahrain where he expressed his wish that the two countries work together for the "stability, peace and future of the region." He next visited Saudi Arabia to strengthen political and economic relations and discuss regional issues, notably the Syrian crisis.

President Erdoğan warmly thanked Saudi King Salman bin Abdulaziz Al Saud and the people of Saudi Arabia on Tuesday evening following his brief visit to the Saudi capital Riyadh. In a message posted on the president's official Arabic Twitter account, Erdoğan said: "I want to give my special thanks to the Saudi king and to the brotherly Saudi people for their kind reception and great hospitality during my visit to Riyadh."

Meanwhile, Erdoğan gave an interview to al-Arabiya television, which will be fully aired later this week, indicating that his country, Saudi Arabia and international coalition forces should work together to fight ISIS terror in the Middle East. He underscored that he informed newly elected U.S. President Donald Trump that beating Daesh would come by cleansing Al-Raqqa, which is the group's main stronghold. The president added that he does not consider the Muslim Brotherhood to be a terrorist group, and that Turkey would only reclassify the group as a terrorist if they carried out armed attacks.

Some officials of the Trump administration previously said that the Muslim Brotherhood might be designated as a terrorist group under the scope of "fighting against Islamic terrorism." This possible move was criticized by rights groups, as the Muslim Brotherhood is identified as a civil movement that has thousands of sympathizers across the world. Egypt's first democratically elected president, Mohammed Morsi, a member of the Muslim Brotherhood, was ousted by a bloody military coup in 2013 by former top general and incumbent President Abdel Fattah el-Sissi.

"The Syria crisis, developments in Yemen and the fight against terrorism will all be on the agenda of the talks [in Qatar] due to their negative impact on regional stability," Turkish Ambassador to Qatar Ahmet Demirok told Qatar's official QNA news agency. According to Demirok, Turkey hopes to step up bilateral cooperation with Gulf Cooperation Council (GCC) member-states in general and Qatar in particular.

"The fruits of cooperation between Turkey and its Gulf partners can be seen in the foreign policies of these countries," Ismail Numan Telci, deputy director of the Middle East Institute, wrote for Qatar's English-language daily The Peninsula.

"Both Saudi Arabia and Qatar attach importance to Turkey's priorities in the region and offer their support on many regional issues," Telci wrote.

Economic relations between Turkey and Qatar saw significant growth between 2007 and 2016 — a period that also coincided with improved diplomatic relations.

Turkey has become an attractive market for Gulf investors in several fields, including the banking, transport, tourism, real estate and energy sectors.

A Turkish school was opened yesterday in a ceremony with Turkish Presidential spokesperson İbrahim Kalın in attendance.

Speaking at the opening ceremony, Kalın said that the school project would crown Turkish-Qatari relations, as well as strengthen ties between countries and serve children of Turkish citizens and other foreigners.
RELATED TOPICS